How to make a tent from a parachute, using the tent poles from your old Arctic Army tent

It’s good to have a sister ten years younger.  Vacations went on after I was gone and the red and white parachute tent went on too, at least a couple more years.  Jan knows how dad did it.   Her big brother Walt told her. 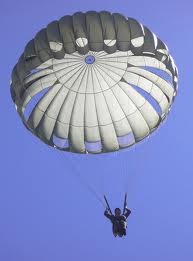 This parachute seems to have thirty panels, so let’s use it for an example.  From thirty panels you could have five equal sides.  So, every sixth panel, at the same height, put a marble against the fabric on the inside, gather the tent fabric around the marble on the outside, tie a cord tightly around the fabric and the marble, and, hey presto, you have a handy knob on every sixth panel around the outside.  If that knob is four feet off the ground, and you make another marble knob directly above it, eight feet off the ground, you can then finish rigging all the tent ropes needed to make a parachute look just like an Arctic Army tent.  Too bad it was not waterproof. 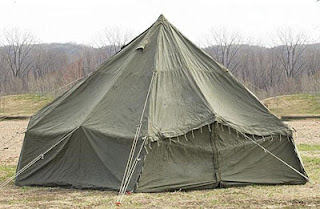 I also remember our red and white beauty being pitched over a picnic table several times on the way to Yellowstone.  I remember that worked admirably for sitting inside and playing cards.  Jan remembers the tent was actually pitched over the picnic table because my brothers had left one of the tent poles behind and it took a few states to find a hardware store that had an adequate substitute.  I remember that now. Sisters are more amazing than anyone!
Posted by Joanne Noragon at 6:54 PM