The eight inch stool from the projects

When my parents were married in 1942, they lived in “The Projects” in Barberton.  Dad worked for Babcock and Wilcox.  Before I was born he got a “work release” from B&W and took a job at Goodyear Aircraft.  It was the war; men could not leave jobs designated critical to the war effort.  Apparently the job he was going to take at Goodyear, electrical design on those big convoy blimps, was more important than ship boilers at B&W.


Mom listed the address as 475 E 3rd Street on her letter to Uncle Hank, but when I looked on Google Earth, it’s a square city block of brown earth and construction (or demolition) debris.  It looked fine when I lived there; I remember doors in rows in red brown brick.  Inside our door was the kitchen, stove on left, table on right, in front of the window.  When I was a baby I didn’t have a seat at the table, I had a swing.  It was squarish and white, a tray went up to get me in and out.  It was suspended from the ceiling by chains to each arm rest.  Anyway… 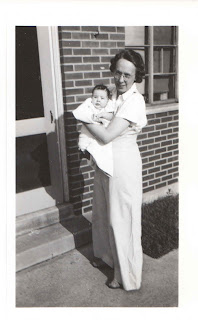 Babcock and Wilcox is in Barberton, or was, and Dad took the bus to work.  And home.  Coming home one day he found a piece of a packing crate.  The truck it fell from was not in sight, so he picked it up and carried it home.  He used the entire piece of wood to build a stool for me. 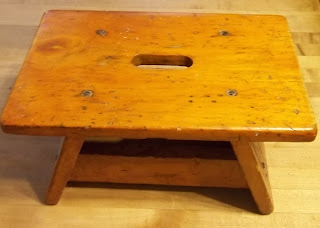 This  stool went through our household of four children, plus any adult use for an eight inch stool.  Mom would look at the top shelf of a cupboard and say, “Bring me the stool.”  Dad used it all the time.  Kids slid it around for balance. Kids used it to reach the sink.  And probably other things they shouldn’t. It came to my house and went through two more kids.  The feet look like they’ve been to a war. 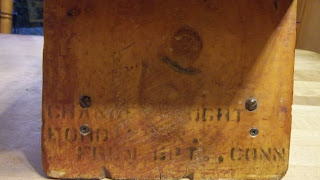 I painted it blue one year to match the décor in Beth’s bedroom.  With no regard for all the original markings.  Something had been destined for Ford, from Conn.  After the kids left home, I got some respect and stripped it back to the original wood.


Back at mom and dad’s, meanwhile, there were grandchildren and adults who needed a stool, so dad built a couple more.  It seemed sufficient for a long time.  But then the great grand children began to arrive.


When Jan and I quit weaving we turned our thread barn over to the guys for a workshop, and our brother Walt just jumped on that opportunity for a woodshop.  He built a monster workbench and has spent the last eight years making sawdust.  He built and sold hundreds of those eight inch stools.  Each grandchild has a personal stool with foot prints and hand prints and birth date and little inscriptions of love.  If Walt thinks someone is too short, they go home with an eight inch stool.  If you look like a special little boy or girl, an eight inch stool goes right in your car. 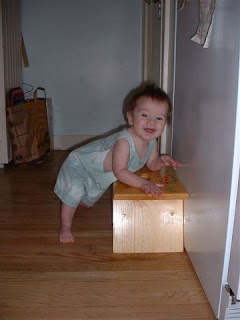 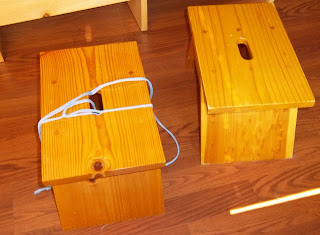 My own eight inch stool is right under my desk, with my feet on it.  I hope that delivery made it to Ford. 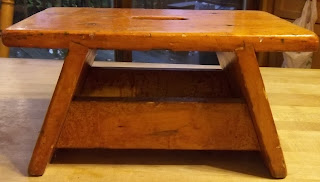 Posted by Joanne Noragon at 2:24 PM