Amusing children in cars goes way back, right to the invention of automobiles and family trips, and there were children to be amused in my family cars.  First, seating had to be settled.  There were three of us, and we sat in the back seat.  The arrangement continued even after the arrival of my sister, who stood in the front seat between my parents.  To determine the back seat order, we had dad’s day of the month rule.  Divide the day of the month by three (children).  If the answer came out even, child three sat in the middle.  If the answer had one left over, child one sat in the middle; two left over, child two in the middle.  Bickering and complaining about how often one’s number came up could not continue inside the car.


The first car game I remember we probably made up.  We called it Red Light Green Light, and my older brother and I picked a color and then kept count of how many of each we got on the way to our destination.  This game was much better going to Cleveland than going to Richfield or Marlboro.  After my second brother arrived and was old enough to add, he needed a light.  Walt and I could holler faster and never gave up our red or green, so mom gave Mel the yellow light and it was worth a lot of points.  Walt and I never fell for that; the chance of actually going through a yellow light was too much of a crap shoot.


One year we were headed pretty far away, probably St. Louis.  Mom picked up a little book of games in the dime store.  One game in the book went down in family history and the other game was a staple over two generations.  Or, as long as we had mom to keep it alive, and before Ipods and DVD players captured the back seat.


The game that went down in history:  the little book had pages and pages of a bingo game, in which the player marked off squares with pictures of roadside objects.  Cats, dogs, trees, churches, gas stations, fire plugs, everything you can remember ever seeing outside a car window.  One game Walt and I were playing was coming out pretty even until each of us needed one more item to win.  His was a boxcar.  There was no railroad within hundreds of miles.  Whatever mine was, it was attainable and I would win.  But we didn’t pass it, either.  We went for miles and miles, Walt scanning the sky for a boxcar he could never find and me just waiting for my number to come up and beat him.  Then mom and dad were chuckling in the front seat.  Then they were laughing out loud.  Then dad passed a flat bed truck hauling a boxcar.


But the game of games was Roadside Cribbage.  Four legged animals were a point apiece.  A white horse was ten points.  A church doubled your points.  A cemetery wiped them out.  Mom quickly modified the rules—five or more animals were a herd and a herd counted five points.  Obviously, a fence separating herds meant more herds.  We played in teams by driver’s side or passenger side.  This was the 1950’s, there were no interstate highways and there was much more rural America.  This game got rambunctious, loud, challenging, competetive.  And, dad was not above going a block out of the way in the wrong direction to give some team the graveyard. 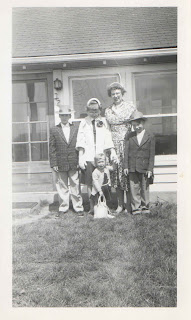 About 1955. Hot and heavy Roadside Cribbage years.
Posted by Joanne Noragon at 10:45 PM