The idea of converting a van to a tiny home and travelling the country fascinated me years ago. Way back in the eighties, when my sister and I travelled together often, I had a rig like that. It was on a six cylinder Dodge chassis, with sofas that converted to beds, an ice box, a stove.

I reconsidered the whole idea several years ago, when I ran out of grandchildren at home and did not need a three bedroom trailer. I looked into a Mercedes camper van that could easily accommodate my loom and myself and my itch to travel. But oh, the expense. Even used camper vans were more than I wanted to spend for a reliable unit.

And then things began going wrong with me. I broke my leg. I broke my shoulder. This not only sidelined me; it challenged my physical ability. I have severe osteoporosis, probably genetic. In fact, my oldest daughter has suffered several broken bones in the last few years, and has the same diagnosis. So much for living on the road.

Then I discovered tiny homes, and in a lot more countries than this. I had fun on YouTube, finding them shown off, toured, self built, commercial, clever design elements. Their biggest problem, at least in this country, is zoning. When we built the storage barn on the property, to hold our weaving supplies, our building permit said it could not be converted to a residential building as septic would not be permitted. Yet its square footage exceeds many tiny homes.

After I'd looked at hundreds of tiny homes, I discovered van conversions. Hooray for YouTube and hooray for all those converters who made videos of their vans and travels and posted them. Then I discovered schoolies!

All sizes, all styles, travelling, travelling, boondocking, especially on BLM sorts of land in the west. Very little or none of that east of the Mississippi, but still ample boondocking opportunities, with most of the comforts of home. And there's always a campground. 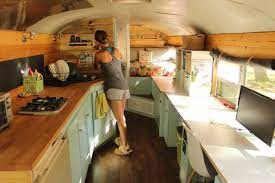 My daughter called one day when I was engrossed in tiny homes over lunch. I confessed. She said "I love schoolies, myself!"  We're both addicts.
Posted by Joanne Noragon at 7:22 PM
Email ThisBlogThis!Share to TwitterShare to FacebookShare to Pinterest