Enough sunshine to light every corner

Our last six inches of snow is melting with dispatch. I will be able to get my car to the shop with little or no interference from the weather. My steering has a problem; it seems to bind in all directions. Perhaps I just need steering fluid; perhaps I'm not going to like hearing what I need. I need new wiper blades, too. This winter has reduced them to rags.

When my occasional Loom Fairy said Good-bye this weekend, she said she would not be by the coming weekend. "I'm rock hunting!" How my rock collecting father would be pleased. I'm sure his starry heart skipped a beat.

I told her about the six foot high, ten foot long bank of industrial shelving, loaded cheek to jowl with peck baskets of rocks yet to be inspected by dad. "What kind of rocks?" The baskets were filled with street gravel, headed for the tumbler, garnets from creek bottoms, headed for the tumbler, geodes to be broken open for amethysts. After dad died, my brother and friends emptied baskets in our flower beds, then in neighbor's flower beds, then in gravel drives all over Akron.

She was laughing hard. I started to say my punch line, but she was already there. "What will geologists say in a thousand years about the traces of African and South American minerals found in North Akron!" 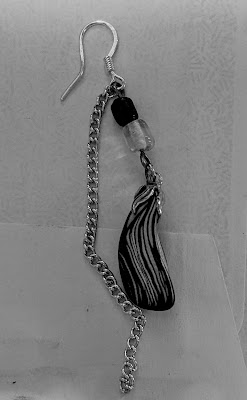 A tumbled rock from the vast collection. He made it into a necklace for me, and I asked the Rock Fairy to turn it to an earring.

She actually is on a fossil hunt. There are lots of those in southern Ohio, in the great Ohio River valley. I was confused. "How will you carry them?" She volunteered a basket, a bucket, a pail. Still confused I said "Not on your back?" That confused her, until she laughed and said they were driving, not hiking.

Meanwhile, back in the studio, I am weaving steadily toward the five shows this summer. Beth will be with me, and I am anticipating some happy days. If I sell out this year, it won't be for want of a loom, like last year.

I've studied my inventory carefully. I warped last on February 4th, my mother's birthday. That is half gone, and I have one warp left, and thread to weave into towels. Then I must reorder, both weft and warp. I bought enough of each last August to put four warps on the loom and weave it off.

All the cream thread on the shelf will be used in the next warp, as will all the colors. Empty shelves, except for towels. 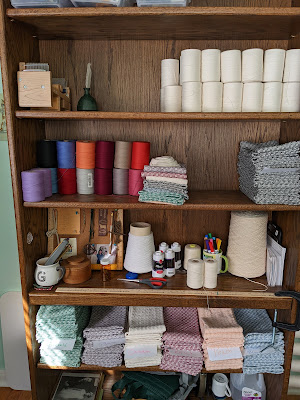 There has not been a price increase from Brassard in the two years I've been weaving and selling towels. That cannot possibly happen again. And freight! It has to be skyrocketing in the face of shipping problems. My price surely will increase this year!

I haven't been in front of the loom yet today, but I've accomplished a good deal of other things to be done, like washing, drying and folding laundry, cleaning cabinet faces, stuff like that. No glass, though. I'm afraid if I make one bit of glass sparkle and shine, I'll be straight down the spring clean rabbit hole! 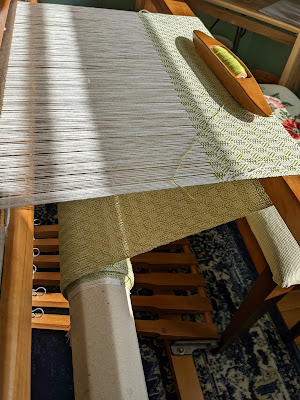 Posted by Joanne Noragon at 5:59 PM
Email ThisBlogThis!Share to TwitterShare to FacebookShare to Pinterest