How to slip out, but only from bed

I've spent my career ruining my back. That's simply one more item to note, seventy nine odd years later. In addition to broken and crushed bits, or perhaps because, my body tossed in fibromyalgia. I wonder how we dealt with it a century ago?
I was referred to an arthritis doctor at least thirty years ago, and kept fairly comfortable with minor arthritic pains. But the day my back went into spasms, like wash boards across each other, the only doctor who listened was my arthritis doctor. Fibromyalgia, he declared. He prescribed a mild dose of Lyrica.
A drug addict I'm not. But I am dependt on several meds for my well being, for relief of back pain. I've used Lyrica the longest, more than twenty years. I'm on my third or fourth doctor; they move or retire. I've weathered several protocall  changes by the federal government, essentially defining which kind of doctor can prescribe different tiers of drugs.
My drug history follows me around fairly well. However, the breakdowns are awful, most especially to me. Three nights ago I looked into the pill cup and saw the ubiquitous statin, some vitamins, and no Lyrica. I inquired, and was told it had been ordered only for thirty days, then they would take me "off" and see how I did. None of this had been discussed with me, the verbal patient who understands, or the prescribing doctor.
Nothing I could do at ten at night, so I closed my eyes and hoped for sleep. I've done withdrawal in the past of narcotic pain meds. It bascially involves one sleepless night and life's the same thereafter. Of course, I hadn't taken the narcotic for twenty years.
I fell asleep straightaway. When I woke it was not morning and I was not raring to go. It as an hour to midnight, my back was in full spasm and I lay in a pool of cold sweat. That was my night, doze, wake, feel my back in motion, sweat, wet pillow, wet sheets.
The last time I woke was 6:30 ish. I sat up and slid to the edge of the bed, unaware the bed pad and sheet came too. I came to the edge of the bed, then over, like over a vanishing edge. I held the bed rail all the way, and and sat down with (I hope) a gentle thump. Nothing hurt more or less than before and my  back kept on grinding.
No harm, no foul, but what to do now? My roommate, a light sleeper was awake, but neither could reach the call button. Carole commenced pounding the wall and yelling. I scooted across the floor and found my New Balance. Let me tell you the kind of noise that comes from the heel of a NB, slammed to the floor. And it still took three or four minutes before five people came through the door, simultaneously!
I waited for them to check me over and put me back to bed.
Then it was my turn to tell them their job. The arogance of checking nothing, telling the patient nothing. I was assured it woulel be resolved before the day's bedtime. "I have a bridge in Brooklyn" I said, to almost every "promise".
Knowing the resolution was days away, I called Laura to sneak in my private bottle of Lyrica. She did a wonderful job, in her best underhand, duplicitously producing them among a pocketfull of absolute trash.  And I was right. No fix Monday, also no fix Tuesday. I'm promised tonight. We'll see.
In the other meantime, Carol's son sent us flowers. No one can believe I've been here mostly on my back in bed for ten weeks. So, it can be done! And Laura and Kamaria visited, with a gnome. Handsome fella. 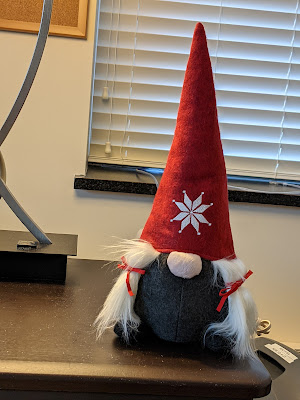 Posted by Joanne Noragon at 2:29 PM
Email ThisBlogThis!Share to TwitterShare to FacebookShare to Pinterest