There hasn't been much to say about the current batch of towels on the loom. I like the color well enough; this set, plus the few natural towels that ended the warp. I have enough warp left to put on the loom for the usual six colors of towels, and then no more unless/until I buy more warp.
The towels came off last week and I fulled them and set them aside. Later I cut them, and set them aside. Saturday morning I stationed them to begin hemming, and then the sleep fog overtook again. I crept to the chair, put up my feet and was gone.
I woke after two hours, refreshed, but cold. And my mind's eye was focused on a blue fleece blanket in the back of my car. I've had that blanket for over twenty years, given by a friend back in my weaving days. It always lived in my vehicle and kept me warm many nights, napping on the drive home.
Straight to the car and the blanket was mine. I put it in the washing machine and returned to my hemming job. 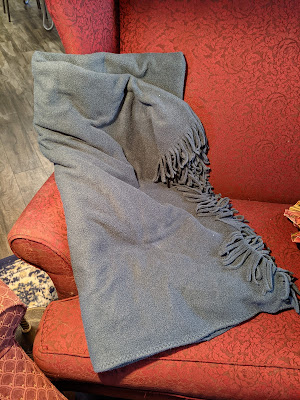 Washed and folded, against the next nap. 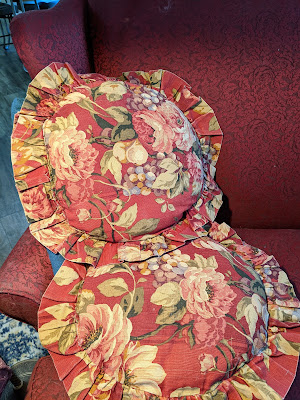 Cat proofed. I am sooooooooooo allergic to cat dander, and Toby has plenty of dedicated and pampered nap spots.
Back to the warm and sunny front room and the stack of towels. My daughter called. I put her on speaker and kept on sewing, describing the window of sunshine, the beautiful green aqua flowing under the presser foot, the cream towels to hem next. 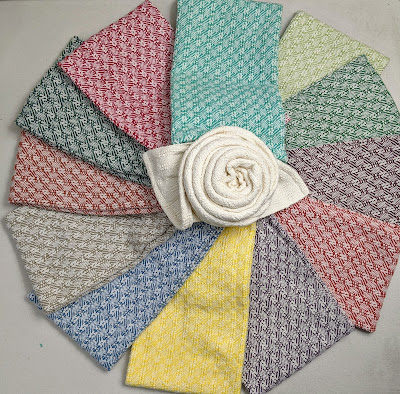 Sounds like Key West, she said. The Caribbean, the Mexican Riviera. And yes, the new green aqua is exactly that wonderful color of the water over the cream colored sand.
When I finished the warp off weaving cream, I had three towels plus an exactly square remnant. Napkin folding always begins with a square, and now I have a square. No need to first fold my towel down to a square to begin folding the rose. I can't say it has improved the appearance of the final product, but it has improved the procedure.
Posted by Joanne Noragon at 12:14 PM 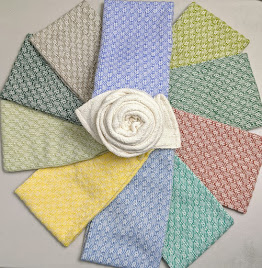