Well, I rolled over for New Blogger. I succumb to imminent threats. Come June they will turn it on as a trial and come July, it's New Blogger or nothing. So, that's that. I hope the type on the page is a decent size. I'm so skeptical! Let me know
I finally stopped kicking a problem down the road. My PC quit a year or so ago and passed us on to a new practitioner. The new doc was a DO and I thought I'd give it a try. She also was majorly homeopathic, and that was OK, too. I'll swallow saffron and stuff for awhile and see. Then, she was gone. Left the practice. Hmmmm.... I scheduled with the next name on the list.
The first visit this new doc handed me off to a PA. OK, I know this drill. Except when the doc stepped in, had she listened to the PA? I close to quit her on the spot, but held off. Next visit (we're still talking way last year here), she handed me off to a "monitoring student". At this point, I have a problem to discuss, and did.
And when the doc stepped in had she listened to the student? So I took up her valuable time and started back at square one. It involves my formerly broken leg, which remains enlarged. This is an old, old problem, called Peripheral Vascular Disease. Exacerbated by smoking and driving eight hours to and from shows and related stupidity of invincibility. We agreed on a compression stocking.
Our next appointment was ten days ago, and when her scheduler called me, I refused a telephone appointment. I'd ditched the compression stocking; it made my toes look even more like fat piggies. She prescribed a diuretic and an ultrasound. There was no clot found. I took the diuretic for two days. But, the second day I peed twice. My kidneys are Stage III, and that diuretic and I parted company.
I sent her an email. She told me to halve the dose and she would find a vein clinic. I ditched the diuretic (and told her) and waited further instruction. Two weeks, nada.
Tuesday I called up the list of docs at Akron General. There are 928. I sorted "vascular". There are 39. I spent Tuesday and Wednesday reading the curricula vitae, eliminating the cerebral and the neuros and the cardios, watching the embedded videos, making a list, checking it twice. Today I made a choice and called to make an appointment. "I'm so sorry, she is out of the office until the end of July." We all know she has a new baby. Good for her.
So, I went to number two, and made an appointment. June 23rd. I emailed my PC. And, she does apologize, but they could not get me into the vascular clinic. WTH? End of rant. I am incredibly fortunate to live in the heart of a medical center.
So what else in my spare time? Weaving, with, unfortunately, extra napping. I hope it's just the spring weather and pollen. Lord knows, my ears and sinus are b.l.o.c.k.e.d.
I finished the purple, and they are being hemmed as I type (if you believe that, I have a bridge of Lego blocks...). 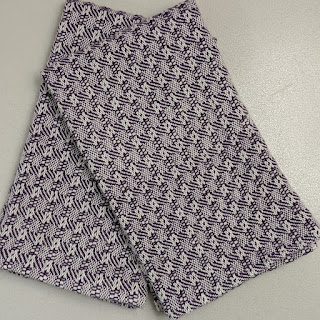 And in the "of Blogger interest", two, maybe three, more items hopefully slipping down the pipe. Grandchildren are involved. You know how that can be.
OK, posting now, and going to have a look...
Posted by Joanne Noragon at 4:11 PM