I began the new weft color today, pale orange. It’s over the breast beam, but short of the cloth beam. When I begin a new tie on, I prefer to get that nasty tie on rod over the breast beam before I first leave. But I’ve been weaving for enough years now that it’s safe to stop and indulge writing a new thought.

What I like about weaving: watching it happen. Some very basic mechanical occurrences are advancing the work over the cloth beam the first time, getting that tie up bar out of action and relatively incapable of snagging a weft thread, undetected. Grrrr…

Other mechanical happenings are the emptying of bobbins, the take up of weaving, filling the cloth beam until there is no more room for knees. Occasionally pushing the cloth take up so far the weaving is brushing the loom frame, but just one more advance, please weaving fairies, and the warp will be gone.

The best part of watching it happen is watching the warp become cloth; watching each row fill in a pattern. It once came to me, it’s like the time my brothers didn’t return to school after lunch. This is the way olden days when we walked home for tomato soup and grilled cheese, and walked back to school. My brothers were first and fourth graders.

The principal called home and mom left, driving along the route to school. There they were, at the corner of Damon and Hollibaugh, watching a city crew make a repair to a sewer. Watching it happen, brick by brick.

Speaking of mom, thanks to my sister we have the missing word, though Jan mulled for half a day to get it. Mine was cup board. Mom’s is even better: mislead. Say my-zuld. She said she was an employed adult before she was corrected.

I bet we have thousands of such words among us. I’d love to hear them, if you’re inclined.

And back to weaving, here are two inexcusable customer service errors. Normally I would mention them in placing my next order. In this case, I will switch suppliers. 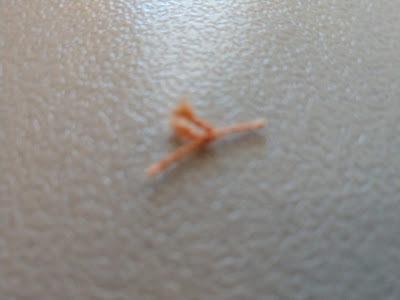 All the bobbins I've wound and woven for the last, huge warp I wound on, have been full of factory knots, as we came to call them. There is a tool workers in thread factories use to tie ends of thread together. The tool ties and tightens an overhand knot. Overhand knots must be cut out and replaced with a weaver's knot, which basically is a square knot. It leaves two ends parallel with the original threads. These ends we leave long enough to work into the weaving, the knitting, whatever needlework we have at hand. 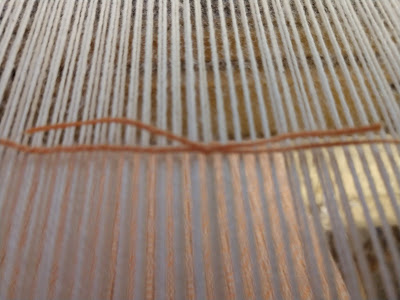 That is a factory knot from the current creamsicle. I've cut hundreds from the thread I bought for towels I've woven since I came back from breaking my leg. Literally hundreds. It came to me today, as I wound the bobbins for the last of the towels, what so many factory knots mean.

My supplier, The Woolery, in Kentucky, purchased thread on ten or more pound cones from the manufacturer, Maurice Brassard, in Canada. The Woolery has a set up for downsizing. Our rug warp supplier made half pound tubes from large rug warp put ups. They used to overwind cones, and we could not put them on the spool rack. Oh, the problems of entrepreneurs.

In my current instance, an inexperienced operator is having difficulty learning the machines and breaking a lot of thread. Oh, no problem! They just tie that nasty knot with their handy knot tier and carry on. A bobbin of thread weaves about a towel, and since I weave continuous yardage, there may or may not be one knot in a towel. However, there is at least one knot and perhaps two or three in every towel I've woven since December. 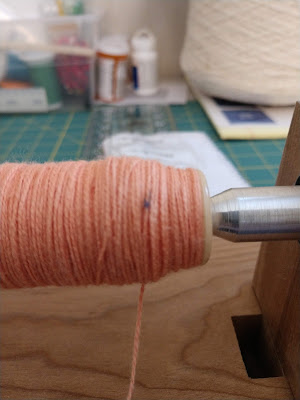 But today, the offensive inexcusable. A grease mark on the thread. I get it that equipment may leave dirt on the operator, who then is honor bound to get it off their hands before returning to the job. So, not only will I report to The Wollery why I am placing all future orders with The Yarn Barn in Kansas, I will call Brassard et Fils and tell them, too.