My title is a word I’ve read often lately, I suppose only on British blogs. I’m not going back to analyze my data. I read the word and mentally pronounced it as whining. That’s an old childhood fault of mine, making up pronunciations instead of looking up pronunciations.

My favorite example is ‘cupboard’, as in Old Mother Hubbard went to the cupboard. I pronounced it ‘cup board’, and thought how unwieldy a word! I did not make the mental leap from Mother Hubbard’s board of cups to the cabinets in our kitchen with plates and cups until a year or two into school.

These last several weeks have been whinging weeks for me. I thought I’d blog a small treatise, but first I really should see if whinging is synonymous for whining. It is not.  And, they are not pronounced alike! I suppose anyone who ever looked it up knows that. Looking  it up isn’t all that easy, what with the silent ‘h’ at the beginning and the ‘dj’ at the end. There is a symbol for ‘dj’, as in judge or Joanne, but not on most typewriters.

For the first time ever I employed the speaker function at the end of the pronunciation explanation by letter sounds. That was so neat; like a kid I made the computer pronounce one word and then the other.

Years ago, when I still had a mother and we took road trips together, we got into the discussion of missed pronunciations. I confessed my cup board to her and she told me of a word that she also mispronounced and misconstrued for a long time. For years I remembered that word and used it. Now I don’t remember her word at all. If it ever comes back to me, I will share.

In truth, I have been complaining persistently, in an annoying way, I’m sure, these last several weeks. Nothing is proceeding brilliantly, or even to plan. I’m through mentioning most of them, as I also believe that only increases the jinx possibility exponentially. Whining is the making of a high pitched sound, as non-verbal babies do. That I have not done, I believe.

March essentially is over. This last week is Laura’s spring break. Last year we were in sunny, warm Texas, enjoying bluebells and Indian paintbrush (which probably has a less derogatory name), good company of family and friends.

This year, lacking garden flowers, I will share last week’s florist flowers. Then I will play ‘whinging’ vs. ‘whining’ for a bit. 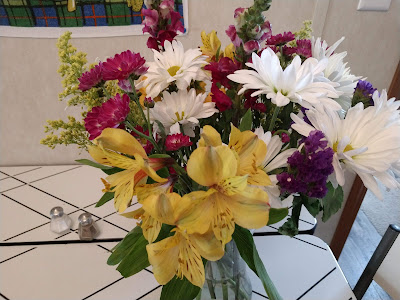 Posted by Joanne Noragon at 8:50 PM