Way back in the nineties, I sat in my booth at a show and watched a young woman openly coughed and sneezed her way through.  I intercepted her and asked her to leave. Her companion came in and cheerily said, “Oh, she’s just catching a cold!”

It was October. We all know what you catch in October. I made an appointment for my first ever flu vaccination. For the next ten or twelve years, the minute flu season was announced, I went for the jab. The last time I had the flu was 1988, the year we all moved into the house together and began the business. I was so sick that year, I slept through the entire four day Thanksgiving holiday, and the following week.

About ten years in, I realized I’d begun sleeping away the subsequent three days after the shot. I paid attention that year, and it was true. Three days zonked. A few more days climbing from a well of foggy brain. I quit being vaccinated against flu virus. It was an annual argument with my PC, and too bad. I was through.

When the shingles vaccination was available a few years ago, my PC persuaded me to have it. I remembered my grandmother and my friend having shingles, and it was, as we said, a no-brainer. But in the drug store nurse’s office, the nurse and I discussed it, and we talked me out of it.

Last fall my persistent PC started in again, flu, pneumonia, shingles. The pneumonia was two shots, spaced some time apart. I elected to undertake the pneumonia and shingles a year apart. The pneumonia shot went off perfectly. Of course, it’s not grown in eggs.

I added shingles to the second pneumonia shot. Splat, out flat for three days. Not sick, merely unconscious.  The second shingles is six months later, or yesterday. I thought this time I’d try overpowering it. Sheer will, kick it to the curb.

First thing yesterday morning we were at the drug store. There were errands to run on the way home. Fortunately, Laura was riding shotgun. I would not let her drive; she had no breakfast and her judgment is extraordinarily bad without breakfast. Some targets were circled a few times. We never found the way into the gas station, though we passed it. At home, I fell into bed.

This morning we had a breakfast date with our friend, Linn. I ate my bowl of oatmeal; Laura and Linn talked. We came straight home; I went to bed. I’m sure Laura went to her library job; the day’s mail was on my desk when I got up for supper. The inside of my brain still has the shades pulled down. One more afternoon in bed, I think.

In other news, it has rained for three days. Here are three days of unemptied rain gauge: 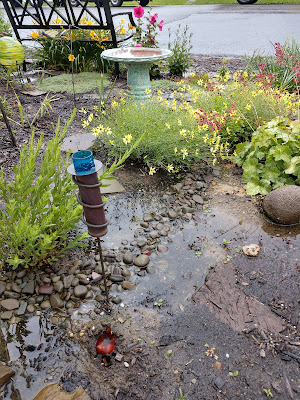 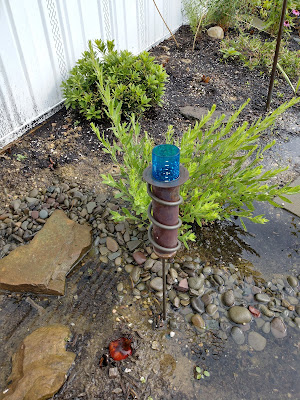 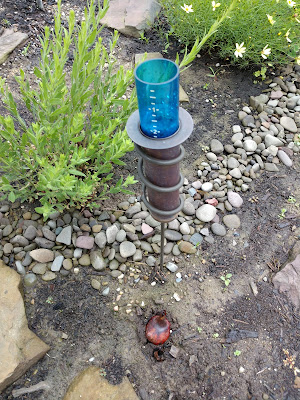 Laura replanted the bulb that floated to the surface. 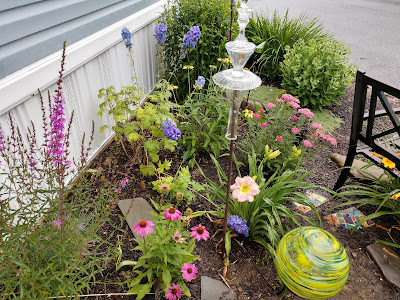 The rain makes everything happy. 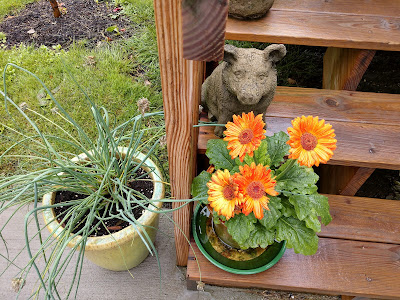 Pig most of all.

Posted by Joanne Noragon at 5:30 PM