A lot of these fish in the sea

I scheduled three classes, Tuesday, Thursday, Saturday. On Tuesday I sat on the world’s hardest chair, reading a book amidst the roar of children and teenagers.

Thursday I went in with a cushion and a book. Laura went to the desk to check in. An imperious late aged teen strong-armed her for a dues payment before joining the class. Her demands were quite clear above the din, and I went to the desk to defend the previously presented coupon. It was a quiet argument on my part, but Miss Teen grew increasingly vocal, and soon attracted a superior.

The new conversation quickly elicited the information the error was exclusively mine because the previously recorded coupon was at home on a dresser; however, Laura was permitted to join the class.

Almost at once the instructor flew out, in exchange of Laura going in, to protest an extra student. He was embarrassedly shooed away by the red faced superior, from whom I also extracted a statement this farce would not be repeated Saturday.

And, I took my cushion and book and sat in front of a classroom window, with maybe twenty children, half a dozen instructors, and a leader calling out moves. Loudly. The leader led classes on Tuesday, also, loudly. At one point he instructed the children to put on protective head gear, then berated them when they came up one short from the pile.

The leader came out and began yelling at the parents; the student’s last name and first initial must be on each helmet. He continued with a diatribe of how disruptive it was to come up short on gear. I read my book. He hit my table, bounced my book and yelled, “I’m talking to all of you.”

I glanced over at the desk and saw Ms. Superior vigorously shaking her head “No!” I returned to my book. Who knew Frank Lloyd Wright had a paramour, two of her children and three employees and a neighbor child murdered at the Prairie Style home he constructed for her in Wisconsin. Interesting book.

The instructor returned to his class, and I turned my attention to him. The students apparently were learning a hand and knee thrust maneuver. One boy near me, maybe eight, had no confidence and his opponent was backing him to the wall with his moves.

The instructor grabbed the child by the shoulder and thundered “They’ll kill you out there if you don’t learn how to hit back!”

I turned another page and waited for Laura’s class to end. I sent her into today’s class on her own. On the way home I told her what I’d seen on Thursday, in the other class.  Indefensible, she agreed.
There are martial arts schools and to spare here. We’ll find another for the summer. 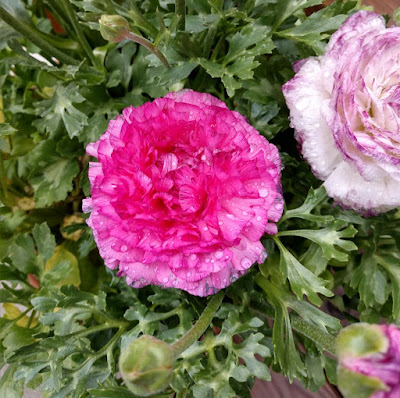 In other news, it poured cold rain all night. The rain barrel almost is full, but tonight's forecast is mid thirties and rain, or snow. Poor ranuculus! 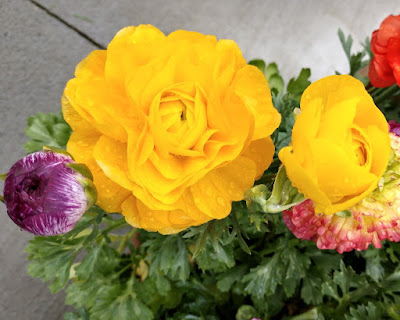 Posted by Joanne Noragon at 6:21 PM