It gets worse. Fractional exponents. Why isn’t the exponent a whole number? Who did this! We must understand the fraction to get the truth. There are rules. Find the least common denominator, for instance. But, enough! I don’t have to do this anymore. It’s Laura who must, and who does not understand.

She is so frustrated. She claims to have studied it in Google, on You-Tube, and, especially to have asked her math teacher. “But, he just knows it; he doesn’t teach it,” she groans. The school year is almost half over. I explained to her the math teacher’s job is to teach as well as know, and she must be student enough to say that to him. Today.

Don’t make me do this again, please. Don’t make me tease out all the little chunks that must be solved to find the exponent. Because the real truth is, I don’t know what the answer to all the chunks tells me, except all the rules were observed. This is far more algebra than I ever bargained for. Why would you have twenty five over nine, let alone want to raise it to the one half power.

I told Laura, if the teacher cannot teach you, your grandmother will know the reason why. I’ll see if that works. 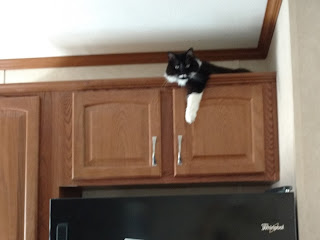 Test: derive a fractional exponent from the example shown.