Out of left overs

The cook of record likes to eat, as does her grandmother, but the cook has discovered one does not become a chef overnight and learning to cook is the same process as any sort of education, not always interesting to achieve.

We would eat pasta in cheese sauce every night, if the grocery procurer would allow. Her second go to is soup, and we do have a lot of that. Soups are adequate; a box of broth, some diced meat, some ready at hand vegetables like spinach or broccoli, onions, carrots.

The opportunity for disaster occurs in the spice cupboard. The cookerer has most every spice known to men. She fancied herself the master of their use, but we ate so many spice disasters, she’s retreated to minimal seasoning. 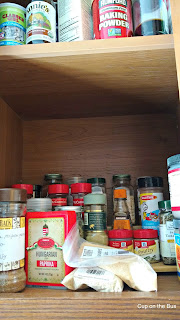 I hoped to find her some cooking classes this summer. But, the national park is not offering cooking camp again. There are two cooking schools in the area, but the summer camps are geared to a much younger age, and guarantee perfect hot dogs or mac and cheese. Beth probably can rustle up some classes for the summer, and it’s only February, so I can let this one go for a bit.

There is a considerable absence of dishes I like. If the cookerer doesn’t like it, it doesn’t happen. But I can be persistent, and then amused when, months later, I find mushrooms, for instance, appearing regularly.

We’re  open to anything that features bacon. I found a recipe for pasta with bacon and peas. Because I would not put bacon in the cart unless the peas came too, I am pleased to say not only did peas cross the threshold, they probably will continue to do so.

My sister made a little casserole I loved; cottage cheese and noodles. I’ve been promoting it for several weeks, but it hasn’t materialized, though the recipe languishes on the kitchen table. Today the cookerer is off with her mother, and I announced I would make cottage cheese and noodles for myself.  I asked if we had everything. “Probably,” on her way out the door.

Only noodles were in house. I went out for cottage cheese, sour cream, Worcestershire sauce and tarragon in order to proceed. It’s in the oven now, and smells wonderful. 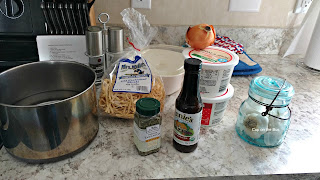 I have to admit, if I were the cook, it wouldn’t happen. My fingers fumble to open anything, spoons fly from my hands, and by the time I was through standing for twenty minutes, my back was screaming. Time to knit and watch TV.
Posted by Joanne Noragon at 4:12 PM