I had no idea what to title this post. I tossed a couple of ideas, and was just ruminating, you know, like a goat, on what is coming up, and there it was: Loose Ends.

I have one dental implant tooth, from back in the day when I could afford this sort of thing. Now I feel it loosening. I've noticed it the last year or so. I've made an appointment with the specialist for next Monday. I'll get a quote.

Laura is going back to her mother at the end of the school year, as you probably know. Despite her mother's firm opinion you can just toss children to whomever may or may not catch them, there is a process, even if we do live in a trailer park. The first time her mother's medical person would call for a record, dead end. Her mother is not her legal guardian.

The first hearing to relinquish custody is next week. Shelly's new husband will accompany her, and I think that is excellent. I don't know him, but when Laura's father had to drop health insurance and this man picked it up, my gratitude literally knew no bounds. I sent a him thank you note.

And a grumpy thing. It's trash day. It's raining. Our collector uses automated trucks that lift, dump the bin, return it to the ground, lid closed. As I was weaving this morning, my recyclables  were picked up. On returning, the bin tumbled over backwards, into my garden. To my surprise, a fellow jumped from the truck and righted it.  He returned to his truck without closing the lid. It's still raining.

This next is an example. I've had no correspondence with Blake in the three years since delivery to college, until last year I sent an email. It must have been an email; I am too slow at texts. I asked us to attempt to work out our differences. Months went by, with no answer, until a couple of weeks ago.

First, an unhappy message that my name on the incoming message had caused a panic attack. Then a long and rambling plea for not meeting, but an alternate information exchange. In the time it took me to text and send "Don't worry about it any more," another text flashed onto my screen, to the effect, if you ever mention me again in your blog, I will call Google to take it down.

Speaking of Google, I've been in a very interesting email exchange with a reader I didn't know of. Actually, of late so many new readers have appeared, more than a few saying they have read anonymously for years, and even gone back to the beginning.

Now, I've done that, gone back to the beginning of some blogs I follow, just to understand the present. As strange as it may sound, this is something I relate to. More time than the average, I say.

One calls herself a former Buckeye and now lives in Oregon. I tell people my last name is like Oregon with an N. I've also been informed by a former Oregonian, I don't know how to pronounce his state's name.

My former Buckeye has indeed read my epistle, and told me she was too intimidated to comment. And I responded exactly as I was told ten years ago, Come for the read, stay for the chat. There you have it.

Except the brave former Buckeye is stymied at the comment section. Her comments do not post. I wonder if it is because her browser is Safari, though I see on my statistics page that people come in on Safari. I know a lot of you have sort of dummy blog accounts. When I click on your name, there is nothing associated with it, except the number of times someone has come for a view. 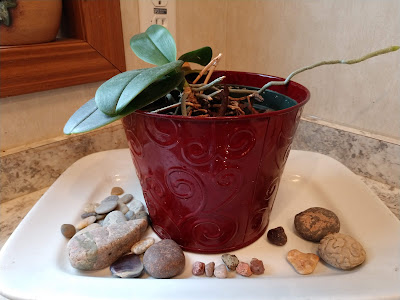 My blossoming rock garden. When I move, hopefully in June, it will move with me.

Posted by Joanne Noragon at 2:22 PM