Last week I came up on the edge of quitting, blogging at least. Don’t know why I do much of anything these days. To stay connected to earth, I guess. The bad health consequences of my encounter with the Red Bus just keep piling in. I want them over. I want “it” over. Won’t happen, that’s for sure.

There are two kid projects to document. Laura and Kay are closing in on shield and stick. Not in a leisurely two week jaunt, like Cathy and little Red Shoes, but a four day sprint. The two day marathon devolved into a four day sprint. Last day is tomorrow.

I think I have not said enough about Kay. First, that’s not her name, and if I ever write it down, you will say “How could anyone have such a mystery name?” I don’t know; I’ve never asked her. Way over a year ago, Kay made an offer on the old house down the road, and my real estate agent said she could present it, but, in full disclosure, there was another possible offer coming in. Would I like to have both at once, if she could shake it loose?

I set a deadline of six p.m. the following afternoon. About 6:30 that day I looked at the clock and said “This guy better get moving.” I called Kathy, my agent, and said “Is he serious?” Kathy said it was just rolling off her fax, but I could reject it as it was late. “No, bring them both over.”

Kathy laid each on the table. She said each potential buyer was a single parent with children. Did I want the single mother first, or the father. I took the mother and heard the offer. Then the father. His offer was eerily identical, to the dollar, except she would pay for the home inspection and he would have me pay. I accepted her offer.

Kathy asked why, in case she was asked. I said it wasn’t the hundred dollar home inspection, but that he had to be tracked down by his agent, told to make an offer or not, sent it after the deadline, and then asked me to pay the inspection, too. I accepted Kay’s offer.

Wham! Bob (and that was the other fellow’s name) initiated a campaign of how much he wanted the house for his boys, and tried to start a bidding war. And I said “fuck you,” and sold the house to Kay. Who, as you may have realized by now, is quite a gem.

So, Kay has been by at eight a.m. for Laura, last weekend and this. That is a “lock the door behind you and don’t wake me” scenario; especially after getting in well after midnight last night from the playoff football game. They lost. Smile. 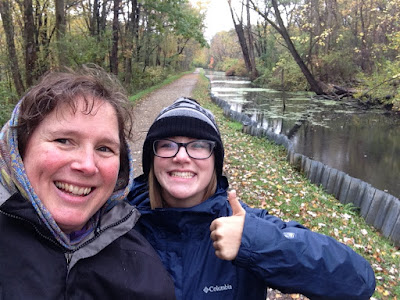 Laura has no idea where they are. “Kay has GPS!” Laura has no idea how far they hike. “One was 1.5 miles, one was 1 mile and one was .5, on the signs.” Three miles, said I, of this morning’s hike. At twenty minutes a mile, about an hour. “We’re doing twenty four minute miles. Kay has a measuring thing on her phone.”

It has rained the entire time. I bought her a raincoat for Washington DC. It’s come out of the drawer. “It’s ugly, but I’m warm and dry.” Who could require more? 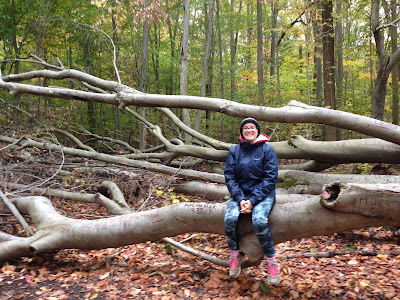 Next up: experimental pennies.
Posted by Joanne Noragon at 2:57 PM