New student orientation has been intense this past two weeks.  Lots of new students and their parents, learning about their new schools.  I am the only grandparent I’ve noticed, but I’m not surprised.  Our family is not typical.  I have meet children and parents from Britain, China, Indonesia, Australia, California, New York, Connecticut.

In the grade school orientation for Laura today the counselor explained the fifth graders could be in orchestra, band, ensemble or chorus.  Or some, or all.  A recess is substituted for each activity.  A low murmur among incoming parents.  The counselor smiled and said Yes, music is big here.

Last night Laura and I went to a band show.  Six local high school bands performing on the field of one high school.  All this playing in August is the prelude to the football season and half time shows.

Uncle Tom is in charge of the band logistics for Emily, and so far exceeds expectation that he stays for every three hour practice he drives her to, goes wherever the band is performing after he gets her on her bus, then goes back to school to pick her up and bring her home.  In two weeks he’s been to five rehearsals and two band shows.  Laura and I went last night, too, to see what it is all about.

The band members occupied the bleachers opposite the parents, and our band’s numbers were visually striking.  The blue and white took half the bleachers, and the program said they would perform the fifth of six sets.

Laura took it all in as she worked on her bag of popcorn.  When the fourth band marched onto the field to perform its fifteen minute set, our band began a steady march to their staging area, which Emily told us is The Pit.  No other band had done this.  “That’s how long it takes to move a company of men at a steady pace,” Uncle Tom explained.

It was a very loud evening, with a lot of great action down on the gridiron.  The blue and white background of the uniforms across the field was striking, but I was most impressed that the band stood and cheered and clapped each of the other bands off the field.  Good sportsmanship.

There were other small town moments.  A trumpet player on crutches who marched in from the sideline to join his band for one number.  A majorette in a leg brace.

And, Laura will go to the football games with Uncle Tom.  Grandma has done her bleacher time for the year.

Our blue and whites 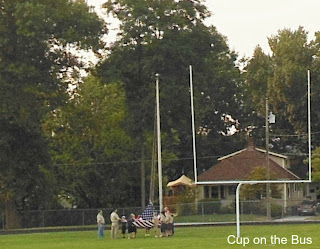 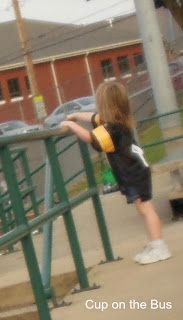 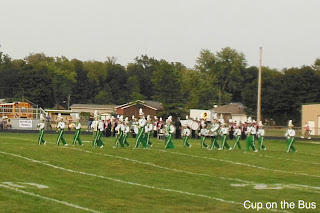 They called themselves The Smallest Band with the Biggest Heart 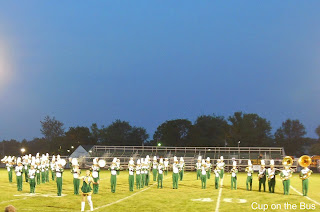 Our Blue and Whites take the field.  The largest high school marching band in the state of Ohio.

A marching swing band
Posted by Joanne Noragon at 10:14 PM