Way back in the seventies, when we lived in Mentor and the girls were little, we had birds.  Beth and Shelly  each had a parakeet, I had a canary, and we all had the finch.  We also had cats, so all the bird cages were suspended from a hook in the ceiling.  Our plants were similarly suspended, in front of windows.  My Uncle Hank said he didn't understand how my entire ceiling didn't land on the floor.  Like I didn't know about mollie bolts.  The folks who bought the house certainly had a job fishing those little devices from the drywall.  Perhaps they replaced the ceiling.

The girls each had a name for their birds; the canary’s name was Harry, but the finch just didn’t suit herself to a name.  She was The Finch.  One evening she didn’t look well.  Puny and unhappy.  Jan and I looked in the encyclopedia and pet books we had, and decided she was dying.  We put her in a shoe box with a blanket and a light bulb for warmth, and sat up half the night keeping her warm and giving her water.  In the middle of midnight she laid an egg.

I went straight to the pet store in the morning and learned as much as I could about taking care of a finch who laid eggs.  At their recommendation I also brought home another finch, extensions for the cage and a nesting box.

The Finch kept laying eggs on the bottom of the cage, and she did not take kindly to the second finch.  She pecked him into a corner and pretty much kept him there.  We named her Carrie Nation, and listened to two finches who each had much to complain of.  Then one day the eggs weren’t on the bottom of the cage, they were in the nesting box.  Carrie Nation settled in on them and the other finch came out of the corner and spelled her.  He was a good father, too, and did his share of baby tending and baby feeding.  There is nothing noisier than hungry baby finches in the kitchen!

When the little finches were big enough I took them to the pet store and traded them for a lot of bird seed.  Carrie Nation sent the other finch back into his corner.  But after some time the two of them were busy tidying up the nesting box. There was a new clutch of eggs, Carrie Nation settled in and the other finch did his job.

The pet store was very nice about taking baby finches back, but I felt a little guilty, and distributed a few around the neighborhood, too.  My next door neighbor, Mary, was happy to take one.  Mary is Christina’s mother.  Their finch lived happily in a corner of their family room for several months and then one morning they found him on the cage floor, dead.  Mary was very distressed, but her husband was very suspicious.  It was a young finch in good health when they went to bed.  Mauricio called the gas company.

Their furnace was leaking carbon monoxide!  Mary was several months pregnant with April at the time, and the whole family could have died of carbon monoxide poisoning without the warning they got from that little finch’s life and death.

Mary and Mauricio took another baby finch from Carrie Nation’s next brood of babies.  That little finch lived a normal finch life for several years.  Carrie Nation did the same.  We took the nesting box away, Carrie Nation kept the other finch away, and eventually he passed away, leaving her queen of the cage for the rest of her years. 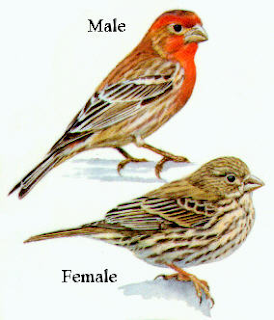 Posted by Joanne Noragon at 3:24 PM