Mom said if kids got in accidents, the worst happened the first week of summer vacation, or the last.  That was mom psychology about the excitement of leaving school and the excitement of returning.  There were major kid accidents in my family, except for Jan.  She tells me that was because she watched and learned.  Being the last child saved her broken bones and stitches, according to her theory.  It did save her lickings.


Walt was seven or eight when he broke his leg.  It got him a pair of crutches and a ride to and from school every day.  Walt fell from a neighbor’s tree; a reasonably acceptable excuse for breaking a leg.


Mel broke his arm, which didn’t get him rides to school because it was summer.  It also cost him a two mile walk home holding his broken arm and then extra visits to the doctor to keep getting new casts as the swelling went down.  It swelled badly because he had been somewhere he shouldn’t, doing something he shouldn’t, and would only confess to a sore arm for a day or two, for which mom gave him a hot water bottle.


To anyone younger than sixty, this must sound rather primitive.  There was no 911 back then and I never remember seeing an ambulance anywhere as a child.  Parents took injured children to the doctor, to set broken bones, and to the emergency room for stitches.  I suppose to get an ambulance you dialed 0 for operator.


My two trips were for stitches.  I cleverly sliced an artery in the back of my hand doing supper dishes.  Blood spurted to the ceiling.  My dad came around the corner, took the dishtowel out of my brother’s hands, applied a tourniquet, wound it tight with a wooden spoon, called a neighbor to mind my brothers and took me to the emergency room.  The forty stitches in my leg (fell out of a tree) were equally low key.


My brother Mel should have received the award for childhood injuries.  As the doctor picked the shrapnel out of his left buttock he could only say he hadn’t seen an injury like that since World War II.  The details are fairly hazy as I don’t understand bombs.  Apparently all the neighborhood boys, my brothers included, pooled their caps, stuffed them into a length of pipe, did whatever is required to make it shoot straight ahead and gathered one afternoon to give it a go.  All the little heads bent over the cast iron pipe as it was ignited for its trip across two fields. It went nowhere, except around and around, shooting increasing numbers of sparks.


Run!  Everybody ran.  Mel ran the wrong way, not fast enough and the little device exploded, against his left buttock.  With the support of most of the crew he limped home, where he and Walt invented a fantastical tale of running and falling down that fell to pieces when he had to drop his drawers for a mother exam.  Leading to our wonderful old family doctor remarking on his luck and the extent of the injury as the poor kid lay on his belly and had shrapnel picked from his rear end.  Mel was eleven that summer.


The shrapnel incident closed the book on mom and dad as the ambulance, but only because all further escapades didn’t involve blood or bones. 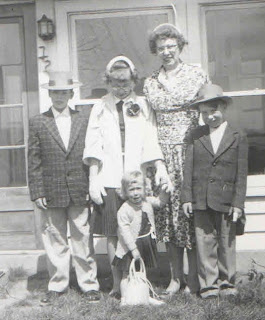 Posted by Joanne Noragon at 9:45 AM