Moraine Avenue was a dead end street.  It had a sort of alley at the end that went back to a rental house and then continued on through to Gardendale.  Very convenient for circling the neighborhood.


Mr. and Mrs. Davis lived almost at the end of the street.  The house Jan went to to dry out and miss an afternoon of school after she fell in the puddle.  My parents and the Daviess were friends in the way parents had back then of bringing a chair and their coffee and sitting in some backyard while the kids played and caught fireflies until the street lights came on.


The Davis’ were warmly mysterious.  They were from “the South” and each spoke with warm, soft accents we didn’t hear at home.  They came with names we had never heard.  Rankin and EllDean.  There was a contest on an afternoon radio show; if you had the first name of the day and called the station first, you won something from the local grocery.  EllDean called the station to comment on the unfairness; she would never hear Rankin or EllDean among all the Johns, Larrys, Sues and Marys they called out.  The very next afternoon the name was EllDean!  Everyone on the street listened for her to call, and as the minutes ticked away and someone ran down to find everyone gone at the Davis house, the women of the street began calling in and explaining she wasn’t home but surely would call if she were.  I believe EllDean won their daily prize.


Rankin and EllDean had a Scotty dog.  He came as a pup about the time I was four or five, and joined the neighborhood kids daily as soon as he was big enough to go out and play.  His name:  D Bye.  D Bye ran with the bikes, watched ball games, went off with one bunch of adventurers or another.  Like the rest of us, his basic rule was to be home for bed when the streetlights came on.


D Bye never gave up on kids; when the interests of one set turned to dating or cars, he took up with the younger siblings.  His sturdy terrier legs carried him miles around the neighborhood.  But as he got up in age, his eyesight began failing.  Sadly, Rankin and EllDean confined him to home and got a raggedly little mutt to keep him company.  Ever the terrier escape artist, D Bye left home every day, his mutt in tow.  D Bye eventually became totally blind, but not before he taught his mutt everything.  For years you could still see a totally blind Scotty trotting down the road, his mutt against his shoulder, manning the wheel.


He enunciated carefully.  “The Boy.” 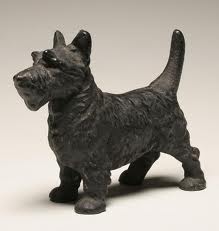 Posted by Joanne Noragon at 4:35 PM