I spent last week with Ann in Wisconsin.  Rural Wisconsin.  Out where all the roads are county and with no logic named A, O, X.  B does not follow A.  Some are named JO  and NY and other two letter combos.  Ann has lived there fifteen or more years and they don’t fool her.  She’s not directionally dysfunctional, either. She always could get me through Louisville or NYC.  My route is memorized.  I take the proper interstate exit and head north on a regular highway through a little town until I have passed enough wrong letters and find the right letter.  Turn left, pass the cemetery and her road is at the bottom of the second hill.


Fifteen years ago all the land between the interstate and the little town was corn.  One year I exited the highway and there was a Wall Mart.  Now all the cornfields around the Wall  Mart have become strip malls and big box stores.  But it’s many more miles to Ann’s county letter road, through corn fields north of town.  Last summer Ann pointed out construction that was to be “the bypass.”  I could see no earthly reason for bypassing a perfectly good four lane highway (well, two lanes north of the town), but Ann said there were new roads planned for all the folks moving up from Chicago and this was to provide better access to the main highway.


I turned off the interstate last Friday, went north past all the shopping, through town, set my cruise on 65 and headed north on the last leg.  But I didn’t know the road!  Before I could gather a wit I was going ten miles an hour at a roundabout.  Well marked, I went half round behind a semi and wondered why such drastic traffic control was necessary.  It was an awful tight roundabout for a semi; he had tires on the curbing-- that driver had my sympathy.  He was ahead of me and never picked up speed.  Quarter of a mile—another roundabout.  This time my semi and I only went a quarter round to stay on the same highway.  My head boggled.  I didn’t remember any curves or turns like that on the old highway.  But I wasn’t on the old highway.  Only the number was the same.  Then, another roundabout.  Three quarters round this time.  My semi started shifting gears and picking up speed; we were back in high corn and headed north.


I had no idea what I’d just done…all I could think was Greg Bachman wouldn’t have sling shot me around three roundabouts in half a mile, stretched the fine motor skills of a truck driver and made an old lady’s head swim.  I couldn’t even look around to see what highway engineering triumph had been achieved.  Probably none.  I found a diagram of the roundabouts.  A true picture of everything except the extreme narrowness of the roadway. 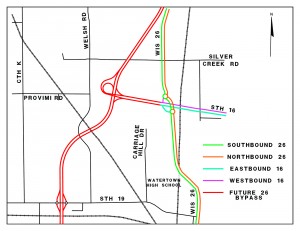 I encountered my first roundabout years ago, in Vermont.  The only cross road in a tiny town had been replaced by a roundabout, eliminating the old four way stop.  There was no warning and no directional signs (those Yankees!) and I came to a complete stop while I puzzled it through.  Once I got it, I was pretty impressed.  But, that was the end of roundabouts for me until I became my township clerk.


Once a year the county engineer gives each township a report on the roadwork done in the township and in the works for the township.  One year the engineer, Greg Bachman, was just bubbling over with a new intersection concept he would be introducing.   Roundabouts.  I was the only person in the room who had seen one and said I liked the one I had used.  He built one replacing a dangerous intersection in another township in the county and it’s damn hard to have an accident over there now.  Sadly, Greg Bachman lost a very close election.  A good engineer in a bad political climate.  We do have another roundabout going in at another bad intersection and with a fine example to follow the new engineer probably can’t go wrong.


I don’t know where Greg Bachman went after his short tenure in our county, but I know he didn’t go to Wisconsin.   Here’s his roundabout that opened in 2006.  There was a “roundabout cam” on the engineer’s web site when it opened, but it seems to be gone now.  I was thinking about the skimpy roundabouts in Wisconsin and it came to me—Ann tells me the thrifty German farmers know the cost of everything and will argue any line item in the town budget that costs more than when they grew up.  They wouldn’t have approved one extra square inch of pavement.  Not to mention those cars with Illinois plates drive too fast.  Maybe next year I'll see some logic.

Email ThisBlogThis!Share to TwitterShare to FacebookShare to Pinterest
Labels: Ann