What may have happened

Aunt Laura certainly filled in enough detail about her mother for me to form conclusions.  The only adjective I recall Aunt Laura ascribing to her mother was irresponsible.  Uncle Bill never mentioned her, nor did my dad, but his disdain was understood.  Aunt Ruth, charitably, offered no opinion on her mother, and my cousin Marge said in her note about Aunt Helen Rita, “Mom’s love was to Grandma Hogue.  That in itself says a lot.”


I can piece together that Mary Emma Hogue, oldest of nine living children of James Lindsey Hogue and Mary Cecelia Maley Hogue, when she was seventeen or eighteen married Georg Marrion Lytle, a man fourteen years older than she.   At the time of her marriage in 1906 Maime had seven living siblings and one yet to be born in April of 1907.  She and four sisters were born in Deerpark, Maryland.  The family lived in Akron, Ohio by October 1897, where the youngest sister, Sarah, died at age nine months.  Five more children were born in Akron, four boys and a girl. 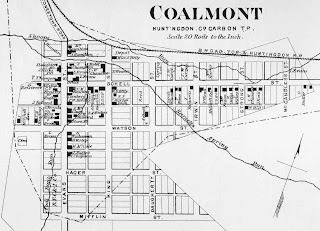 Coalmont Pennsylvania
map from the 1873 Huntingdon Co. Atlas
Georg Marrion Lytle was born in Coalmont, Pennsylvania.  Coalmont and Deerpark are about a hundred miles apart, and the trip is over the mountains, not through them.  Maime lived in Deerpark until she was six, when the family moved to Akron.  We don’t know how Maime and Georg met, but they probably did not meet in Deepark.  Georg was twenty two when Maime and her family left Deerpark.  He may have been working for mining companies at the time, and moving about, but without knowing his employer and their business locations, it’s difficult to say what towns Georg may have been in.  It’s probably safe to say they met in Akron, a hub of commerce.  Maime’s father was a man of business, a developer, in business with his brother-in-law, Frank Bisson, who developed Bisson Avenue, named after him.  So, Georg and Maime met. 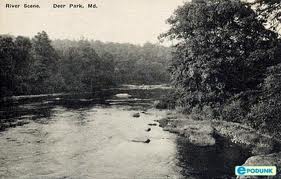 
We know little of Maime’s personality.  Almost nothing, in fact.  Aunt Laura calls her irresponsible; my cousin Pat tells of Grandma Hogue yelling down Bisson Avenue for the returned Maime to tend to her own crying baby.  With seven younger siblings in her house and herself the oldest, Maime was certainly expected to take some responsibility for child care, laundry, cleaning and food preparation.  According to Aunt Laura, there seemed to be no joy in the house.   I’m certain Maime saw Georg as an escape.  Perhaps even as a responsible parent figure, given the age difference.


So, they married and lived in Coalmont, with Georg’s parents, the wisp of a grandmother remembered by Aunt Laura.  They married in 1906, my dad was born in August 1907, Uncle Bill in 1909, Aunt Laura in 1911, Aunt Ruth in 1913……just as many babies, and as often, as the house she left on Bisson Avenue.  They were back in Akron when Aunt Helen Rita was born in 1915, so Aunt Laura’s memory is right on her three to four years of age, hanging on the picket fence at Grandma Lytle’s home and watching the school children, probably including her brothers John and Bill.


So, nine years after marrying George, and with five children in that time, Maime left Coalmont and went home to Akron.  Aunt Laura cites the reason as being frequent moves for Georg’s jobs.  I wonder.  Aunt Laura, at least, lived in Coalmont, with her Grandmother.  Georg’s family appears to be educated; he was an engineer, two brothers and a sister were teachers.  I would think schooling for the children in a fixed situation would be important.  Can’t discount, though, that children not in school were left with the grandmother and the two older boys travelled and were resettled.  But I wouldn’t bet on that.  My dad had stories about his uncles that I think would be more likely to have unfolded in a more set situation, where the Uncle was teaching, than heard as my dad moved from place to place.


I’m betting Maime was more tired of regularly having children than she was of moving.  So, she went home, at age twenty six or seven, with five children (one unborn), and without a plan.  She refused to return to housekeeping with Georg, who lived another fifteen years, dying, probably of tuberculosis, in 1930, fifty four years of age.


In the end, the extended family could not take responsibility for Maime and her five children.   If the children went to the Children’s Home at the beginning of 1921, just after Aunt Laura’s tenth birthday, there is a six year gap when the five children were “everybody’s children”, but nobody’s children.  A long time to eat “coffee-sop” for dinner and get your hugs from somebody else’s mother.  I can appreciate my dad’s attitude toward his mother and understand why none of her children would buy a stone to mark her grave.  And I can understand why my mother could say “Fifty years is long enough!”
Posted by Joanne Noragon at 4:11 PM