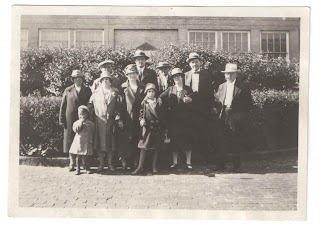 At Quaker Oats on the way to Niagara Falls.  In front to back pairs, Uncle Hank, Grandma Rolf.  My mother is the young girl in front of her tall father, Walter Rolf.  Beside Walter, Grandpa Cox.  In front of him, Grandma Cox.  And assorted friends and other relatives, including Grandpa Rolf's step-father, Lou Troike.


My mother saw a deal of the country as a child in the late ‘20’s and 1930’s because her father loved to travel.  He packed up more than his family.  These were group excursions, friends and relatives, travelling in vacation convoys.  My grandfather looks quite the expansive and ebullient patriarch in these pictures; I see him as a Teddy Roosevelt, Rough Rider kind of expedition leader.  Mom’s grandparents, Grandma and Grandpa Cox were generally along on these trips.  Grandpa Cox didn’t drive.  Grandma Cox didn’t drive well.  Car transmissions were standard shift back then.  Marcia could navigate the flat well, but the hills were iffy.  To solve this, her car was always between two others.  Her standard instruction was to shift to neutral and be pushed up the hills by the trailing car and go down the hill on the bumper of the lead car.  Apparently it was a standard and well oiled routine for all of them. 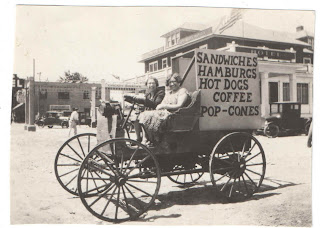 
I understood mom’s stories of Tourist Camps; we passed a lot of these highway cabins and motels in my own family vacationing in the 1950’s.  The link is to an excellent description of tourist accommodations and dining in the 1930’s.   Mom said on their trip west in 1936 she ate cherry pie for breakfast every morning.  My Grandma Rolf told me that Uncle Hank was a difficult eater, who, to her mortification, exclusively ordered mashed potatoes and water.  She only got substantial food into him when she could make him a sandwich from the provender of a grocery store. 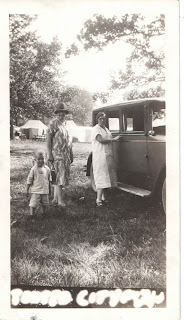 Grandpa Rolf had a movie camera on the great trip west in 1936.  There are hours and hours of moving pictures of scenery. In black and white. In the entire film the one scene with people was my grandmother, mother and uncle emerging from a trading post.  Ten seconds of footage.


The surviving souvenirs of the great trip came from trading posts.  When my grandmother sold her house, most of the Apache trays, olla’s, rugs and pots were packed away at my parents’ house, then sent to my house, where all remained packed away except one large olla, where we threw our wet mittens and scarves every winter.  The souvenirs all moved in here with us and kicked around for a few years until I decided to send them to a more appreciative home via EBay.  The prices the baskets brought were astounding, and even after I took a severe email lashing from someone who could not believe the olla “had been the family junk basket for over one hundred years,” in its very deteriorated condition it sold for several hundred dollars.  As did the pots and rugs.  A winnowing tray was the real sleeper, and as a bonus, we sent the purchaser a tape of the hours and hours of moving scenery from the great trip west.


Mom remained a great traveler and commandeered children and grandchildren for annual vacations.  In 1980 we took our own great trip west, to make another visit to Yellowstone and to see Mt. St. Helens.  Somewhere in Wyoming mom looked out from the interstate and said “Look.  Over there.  It’s the road we took in 1936."  A snaking little road way down in the valley, climbing up the mountain.  We left at the next exit, worked down to the road and took it for the rest of the day.  It was serious, tiring, hand over hand mountain driving. We had a flat on the camper trailer on the mountain and I off-loaded ten kids to the other side of the guard rail while it was being repaired.  A rattle snake backed us all up to the guard rail and we climbed up and just took it all in.  I could just see Grandpa Rolf, jaunty pipe, leaning back in the seat and leading his expedition.
Posted by Joanne Noragon at 1:28 PM