My cousin Kathleen, Aunt Laura and Uncle Frank’s oldest daughter, started tracing family history more than twenty years ago.  My daughter Shelly did the same, about ten years ago.  Each of them asked mom for some “memories.”   This is mom’s letter to Kathleen.


As Kathleen was born around 1933, the ages mom cites for the three sisters is incorrect.  But, the rest is “facts,” and it’s interesting to see how I put together what I knew to conclude mom and dad met at her home on Christmas Eve and dad was fresh off the ships.  This is the real story (and just as good!)


Another great story:  Lenore Caroline Rolf was known to most as Nicki.  My aunts, my uncles, my cousins, my dad called her Nicki.  Only Grandma Rolf called her Lenore.  Her father intended her to be a boy.  To make up for her failure of sex, he called her Nicodemus. When I think back and consider my grandmother used no nicknames, and the grandmother I knew was a strong personality, I can only marvel that he did it and that it stuck for life.


There is no “painful” part in recalling the good old days.  It may be your Mom and Dad would experience more pain in remembering the depression years—the doing without, hardship, debts etc.  However, the depression years did bring them three lovely girls—Kathleen, Patty and Ellen.  They also had a lot of good friends who helped them before I came on the scene.


Let’s set the stage:  W. 21ST St., Cleveland, OH-1937-38-39-Daisy and Don Haupt, Michael Boehm, Henry Rolf and Elmer White.  I do not know how Daisy met your Dad.  Daisy was a nurse and your Dad was on WPA.  This crew went to Independence to see your parents regularly.  Finally, Henry persuaded Iris Mielke and myself to come along to play Armbuster.  Made you all about 6, 4 and 2.


Uncle Jack was in the Army, he’d gone to Tri-State and was a radio operator on the Great Lakes when he broke his ankle (1940).  He stayed with Daisy and Don and came to my Dad’s shop on 21st St. nearly every day.  I worked at Bailey Wallpaper on W. 25th St.  Never saw him in all the time he lived with Daisy.


Daisy and Don were building a house on Creston Ave.  Uncle Jack helped design and wire it.  The first time I saw your Uncle Jack was when he came waltzing in with his fiancée at Daisy’s (1941) and walked out of my life with nary a glance.  (Anyway, he was too old for me?)


If you remember, Iris and I made clothes for you girls. Should be some pictures someplace to prove it.


Things in the world moved along to Dec. 1941.  Your Dad was employed at Hauserman by this time.  You lived in Richfield and we were all going to be at your house Xmas Eve.  Your Uncle Jack was now  employed at B&W in Barberton and was also going to be there, because he was dis-engaged.  That year for Xmas I made a number of men’s scarves (basket weave pattern) and made one for your Uncle Jack because he was going to be there and Iris and I decided he needed a gift to open.  I am now officially an old maid at 23, going on 24, so it was safe to do this.  I had no boyfriend and no prospects of marrying.  I was a very shy and hard-to-know person.  Your family were my friends and girls I had known in high school.  No boyfriends though.  I had about 3 dates by Dec. 1941.


I can remember where Uncle Jack kissed me and how I felt but I can’t remember when we had our first date in 1942.  I know we went roller skating a lot and by Easter we were engaged and were married June 20, 1942.  You were 15, going on 16 and Bobbie is 9 months old.  Now your memory should fill in some of the many pleasant times we had together. 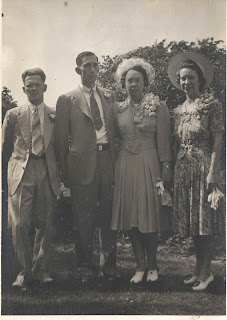 Don and Daisy Haupt stood for my parents at their wedding.
My youngsters talk of instances when we came to supper-Melvin trying to eat a hard marshmallow when he was about 2.  Melvin also proved to your Mom he could touch his nose with his tongue with teeth in his mouth.  Bobby’s “darned” socks were the pride and joy of my boys when they were handed down.


P.S.  Time proved that Uncle Jack wasn’t “too old” after all.  We did make 35 years which was more than I ever hoped for.  Uncle Jack’s famous line was that 1932 was the year he didn’t eat.  Most of the tools in the basement were bought that year! 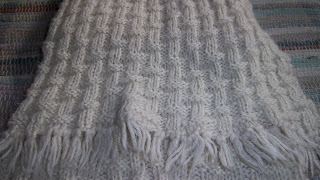 Posted by Joanne Noragon at 3:08 PM