It was the corner acre of a 60 acre farm belonging to Joseph and Julia Hajek.  We bought the corner acre, in the N.E. corner of Hajec’s farm.  When I first saw the place, I thought it was the most desolate spot on God’s green earth—nothing there but the farmer’s corn patch and his cows browsing!  However, we bought it for $75.00—one acre of worn-out farm with not a stick of a tree or bush on it.  Bill Logan, a long-time dear friend, told us the City of Cleveland was selling some of its portable wooden voting booths.  Frank ordered two of the booths for $25.00 each, and for another $25.00 we had them moved out to our lone acre in Richfield.  They were set down in an L shape, side by side, and that was just the beginning our Dream Come True.


We all, little girls included, worked at “our place” when we could.  We’d picnic there and the girls had a ball playing around the two voting booths.  We added a third room off the one that would become the kitchen, and this became the kids’ bedroom.  By this time I was pregnant again.  Frank’s Dad bought us some fruit trees, and planted them around what would someday be our HOME.  We moved into the three unfinished rooms, (no ceilings, no walls inside, no window screens, very primitive) in June of 1941.


That September, our only son Bob was born.  We named him Robert Charles, for his grandfather, Charles Robert.  It was a joyful time for us.  The girls were delighted with their baby brother and frank was proud enough to bust his buttons because he had a son.  We added a larger room north of the front voting booth, and by putting a partition through the center, the room became two smaller rooms for the children.  Pat and Ellen slept on one side of the partition and Kathy and Bobby on the other.  Frank and I now used the bedroom off the kitchen, and the room we had been sleeping in became our living room.  With some second-hand furniture we’d bought, and used pieces we were given, the place finally was beginning to look like a home.  We put up ceiling board in the 3 original rooms, and wall-paneling in the voting booth rooms, replaced the tiny windows with the larger ones, and screens.  Frank’s brother Elmer wired us up so we could have electric lights instead of the oil lamps we’d been using.  With the electric in, we could have an electric pump on the well too, so we didn’t have to go outdoors to pump water.


Until our third daughter, Ellen, married, the four kids slept in the large partitioned bedroom.  After she left home, we dismantled the partition and the one big room became the master bedroom, and our son Bob moved into the small bedroom off the kitchen.  In the meantime, during all those changes, my brother helped pick down the dirt in the unfinished cellar.  He’d pick down a lot of dirt during the weekend, and the children would haul the dirt out in their little sand pails or gallon paint buckets.  Sometimes they didn’t appreciate Uncle Jack for doing all that picking, but they hauled dirt with a right good will none-the-less.  We’d had professional house raisers lift our 3 rooms and dig a trench all around.  They put up the original basement walls and lowered the house back down on the foundation.  When we finally got all the dirt cleared out of the basement, we cemented the floor and had working area for laundering.  We also had a coal furnace installed, and that too was a wonderful thing for us all.  We’d heated before that with a Warm Morning Coal stove in the kitchen, so that furnace in the basement was a blessing in all of our opinions!  Eventually, the coal furnace was replaced by an oil furnace, then that in turn was also replaced by a gas hot water heating system.  We were really making a home of our two little Voting Booths, and what a thrill each improvement was to each and every one of us.


After the married children started bringing their children to visit us, the small front voting booth that served as living room was no longer adequate as far as seating arrangements were concerned.  So we hired a local architect, Mr. Lowry, to draw up some plans for another larger living room.  At first he tried to add the new room to the front of the house, incorporating the roofs from the two front rooms, into the overall plan, but it just wouldn’t work out right.  So then he considered the back of the house.  By using the one bedroom on the L, and squaring off the remaining space, he came up with a 14’ by 20’ living room with a nearly flat roof.  We had Mr. Watson and his son from Peninsula build the shell of the room, and we finished the inside ourselves, as we have done through out the house.


BABY DAYS.  Our Kathleen Marie was born at 3:00 p.m. on a Thursday.  She was born adult and perfectionist! She walked and talked early, and used perfect words at all times, never using “baby talk.”  She was always ready to be friendly to our friends.  She has grown up to be just as perfectionistic as when she was a child.  Our Pat was only 1 ½ months old when friends offered to drive us to Akron to bid goodbye to Ruth, who was about to enter the convent.  On the way to Akron, we were in an auto accident in which we were all more or less injured except Kathy, who had only a few bruises.  A friend was holding the baby, Pat, and her head got knocked against the rear door as the car rolled over.  Her eyes were damaged, and until she was through second grade, she saw all pictures upside down.  Because of the accident, pat’s speech was very slow and she drawled everything a yard long.  Her eyesight returned to normal about the end of her second grade.


Ellen was the most beautiful of our babies.  She had large blue eyes and golden curls.  Her beauty was only “skin deep”, as she became most obnoxious in her insistence upon immediate and constant attention.  Even misbehavior was employed to bring her the absolute attention she demanded.  She must always have “center-stage.”


Bob was a very fussy baby.  With the girls, I had no discomforting pregnancies, but when he was conceived, I was constantly ill, the whole nine months.  Even after he was born, he had colic for months and it seemed he did nothing but cry. The girls were so easy to care for that I just didn’t know how to cope with that fussy baby boy.  He did grow out of that colic stage eventually and became a loveable and loving little boy.


God gave me an abundance of good health to be a good wife to my Frank and a good mother to our little family.  The pregnancies were easy except for the last one.  My brother John would come up from Akron weekends and worry about my looking so badly.  He’d bring fresh peaches and corn, I’d cook for the family and immediately after eating I’d have to run outdoors and heave everything back up.  Our baby was taking so much of my strength and the hard work of bricking and painting and “doing” for the house was sapping what little strength there was left.  After Bob was born I felt fine again, except for his constant crying and fussing made me extremely nervous.


When Bob was about 4 years old, after he had become a lovable and loving little boy, I developed a cancer of the uterus and had to have surgery.  I was desperate and I just KNEW I’d never return from the hospital to watch my family grow up.  Kathleen, who was only 14 years old at the time, got the other girls off to school, her daddy off to work, and fed them too when they got home again.  Bless her heart, she did a wonderful job being surrogate mother while I was in the hospital.  Thank God, I did have a successful surgery and things have been wonderful ever since.  When I was around my sixtieth year, I developed bursitis in my left shoulder which the doctor attributed to my doing too much quilting for too long at a time.  He advised me not to quilt for at least a year, which advice I flowed.  It bothered me, as I dearly love to quilt, but my sister Ruth got me hooked on crochet, in the meantime, so I needn’t sit twiddling my thumbs and driving myself nuts.  Now, I can quilt again, as well as enjoy doing the crochet.


It was about this same time that I told Frank I could no longer cope with hauling our looms to the Art Shows to demonstrate weaving.  I’ve neglected in this journal to say that some of our six looms are between 5 and 15 years old.  We weave placemats, rugs, fancy wool scarves and various other fancy articles.  We’ve made out well as far as sales of our articles went, at the Art Shows.  But when I said no about carting the looms to the shows, nobody bought our wares because not demonstrating, they didn’t realize these articles were handmade.  So, the room that had originally been our bedroom, then our living room, became the LOOM ROOM.  We’ve had students we’ve taught weaving from time to time, but nothing spectacular has been the result of our weaving hobby.  Some of our items have gone to many states in the USA, some have gone to Sweden.  We were very proud of THAT sale, as the Swedes are some of the most accomplished weavers in the world.
Posted by Joanne Noragon at 1:46 PM 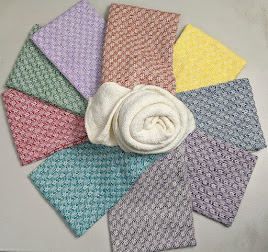