Back when I was exhibiting at shows, I’d think occasionally how I’d know it was time to quit.   Would it be when we ran out of ideas and customers stopped buying?  Would it be when I needed the next van?  When I loaded up each year for the first show in February I’d think “Maybe I won’t be able to lift the dolly in this year.  I’d have to quit.”  I’d think about my friend Lucy, always ten years older, who drove a van as big as mine and hauled a trailer.  From Alabama!  And, the dolly would go right up there and I’d be off for another season with our customers and the friends I worked with.


Then Jan was done with weaving, and I needed a new hip.  But I couldn’t just go.  So, we decided on one more, reduced, season, to say thank you and good bye.  My hip hurt but I could still lift the dolly in the van.  She’d rather be quilting on her big new Gammill, but she kept on weaving.  It was good  to say Good Bye.  I took a few jibes from cynical husbands who read my banner.  “Oh, yeah, just like Cher!”  Well, she has what it takes to go round twice.   It really was so long, been very good to know ya.  That was 2003, by the way.  Lucy is still out there, with her daughter, now.  We had such fun rooming together.  But, it was time. 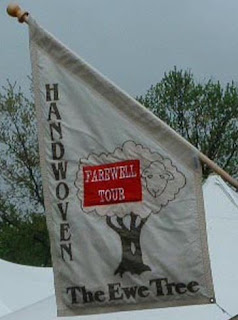 Linda called me this week.  Did I still have my Farewell Tour signs, and could she have them.  My very tall sister found our old banner on top of the shelves, and I just finished clipping off the Farewell Tour appliqués.  Linda thinks she’ll sew them on her banner while she’s at St. James Court Art Festival this weekend.  That’s the show I retired from.  Sold out by four in the afternoon, drank a Champaign toast with all my friends who had secretly planned a little farewell, and Ann and I came home.


So, good job and good luck, Linda.  From someone who always believed in lucky shoes, lucky slacks, and just plain luck, you’ve picked the luckiest show to sew on the Farewell Tour patches and start.  Then pass them along when you’re done.
Posted by Joanne Noragon at 2:10 PM