I am so excited!  Going through all these old pictures I’ve been posting, I turned up a negative.  Some of us remember those!  I held it to the light and hollered:  It’s the gizmo!  Long story, getting the print, but here it is. 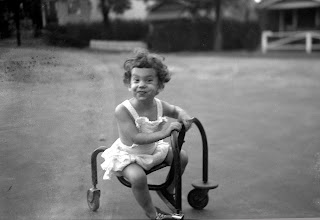 This picture is probably 1955.  The little girl is a family friend, exactly one month older than my sister.  The gizmo is probably ten years old then.   It’s been through we four children and all the neighborhood children; lost two rubber baby buggy bumpers, along with any paint it may have had announcing its name.  See the smile on Dorothy’s face?  The gizmo was that loved and wonderful.
Any child with short enough legs could ride it sedately.  Once mastering sedate, the gizmo rider went to the top of the street and came down the hill, shrieking, legs outstretched.  Much larger, older children did this routinely.

Back down the hill, on the several hundred square feet of blacktop in front of our garage, just riding was OK, but a thrill ride assist from an older child was to die for.  Well, occasionally be injured for.  A big kid could grab the tail end or the front of the gizmo and swing the rider around and around and around in a circle.  Then let go.  Generally the big kid fell down and the gizmo pilot rode it out, braking as much as possible with bare feet, hoping to crash land on the grassy bank or in the grape arbor, not against the garage or in the street. I believe the gizmo corpse that was scrapped another fifteen years later had lost its final rubber baby buggy bumper.

This engineering marvel and childhood fascinator has been described over and over to anyone we thought could replicate it from pipe and an old bicycle seat.  Sadly, the only clear image was in our childhood minds.  Jan emailed this picture to our nephew:  Show this to your dad, maybe with a picture he can make it.


Or does it require a hill and a quarter acre of blacktop to qualify.  My god, it might need a bicycle helmet.  Never mind.
Posted by Joanne Noragon at 4:29 PM

Email ThisBlogThis!Share to TwitterShare to FacebookShare to Pinterest
Labels: childlhood