In my middle career I was a weaver and exhibited at art and fine craft shows.  I’ve been retired from that going on ten years soon, but I still show up to see old friends and what’s going where creativity flows.  In June an art show junkie friend and I went to Three Rivers, a three day show in Pittsburgh.  We walked the show almost until it closed, had dinner in a great Italian restaurant.  Carol’s a full blood Italian and it had her stamp of approval.  We met art show friends for a glass of wine, heard about their day.  Linda mentioned people trying to track down a kitten crying in the motel parking lot.  She thought she’d take another look before she turned in.  I was probably not awake anymore.


The next morning we ate breakfast in a packed dining room.  The room was filled with people wearing logos of a ball team that was not Pittsburgh.  Carol could tell me if I’d ask her—I gave up on baseball in the ‘90’s.  Carol hasn’t, and quotes earned runs and RBI’s just like Mom used to.  They were in town for a series of games between their team and the Pirates, so Carol had a good chat with the people next to us.  Then we packed up, checked out, put our bags in her car and went to wait for the shuttle to take us back to the show.


Now we heard the kitty, crying loudly.  And there he was, firmly in the grip of a young girl.  Middle to late teens, hanging on hard to a very scrabbly little kitten.  How did you get him?  With the kitty app on her phone.  WTF.  I really am old.  A lot of folks had spent a lot of hours trying to lay hands on him, and this little girl played “meow” on her phone and nabbed him when he came running to mama.


Her mother came out from the motel, where she had gone to get a phone number and call the Humane Society.  Which was not open.  She told her daughter they would drive over and see if they could leave him.  I said I’d take him.  We had some unfinished business at the show:  Carol had her heart set on a silver watch that was being altered for her over night.  I said not to worry, I would drive around the block until she reappeared at the curb with her watch and then we’d go home.


We stopped at a pet shop in a strip mall to get a carrier and when I explained it was for a rescued kitty they gave me a cardboard carrier and thanked me for rescuing a kitty.  When I got back to the car Carol handed the kitty back and said “We’re going straight home!”  He was a tiny, tiny handful.  Literally hand over hand full. My two hands covered his entire body, but he would slither up and almost make his get away before I could get a new two handed grip.  In the box he just howled and dug frantically for freedom.  So, I carried him home in two hands.  He drank a little water a couple of times, when I held the dish to his lips, but he basically spent two hours trying to get free.  I wondered how feral he would be when I let him go.


At home I put him in our cat carrier while we rounded up some necessaries.  He was frantic, clawing at the wire.  There’s no kitty food at my house, so I put cat kibbles in a bowl and softened them with water, then opened the carrier door and put it in.  He fell into the bowl, snarling and eating, both front paws surrounding the food.  Broke my heart.  It was probably a quarter cup of wet food and he had it down in seconds.

We put together a temporary litter box and a water dish, but shutting the carrier door on him and them caused an immediate, frantic attempt to claw out to freedom.  So, I opened the door, let him out and waited for Jan to get home from wherever she might be.

Jan is my sister; she, her husband and I live in the same house.  Unilateral decisions not being allowed, new kitty and I waited.  New kitty slept. With one eye open. 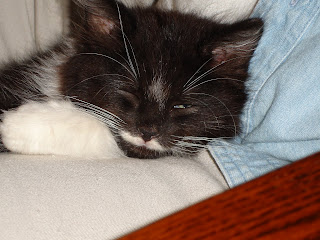 Who could resist him?  Jan said OMG, he's adorable.  Hand him over.  And that's how we brought new kitty home from Pittsburgh in June.