Yesterday morning I was in a quandary. It already was hot at eight a.m. I had that vein ultrasound at one thirty. I had a porch of plants about twelve hours overdue for watering. I had trash to move out to the trash cans. On top of that my foot still hurt, literally like blazes.
For me, that is an entire, slow motion morning. So, I took a shower, just so I could sweat, watering plants.
I stopped at the drug store for the back ordered losartan. I was told it is on backorder per the factory. I made a mental note to kick this one back to the cardiologist, and went on my way to the vein ultrasound. 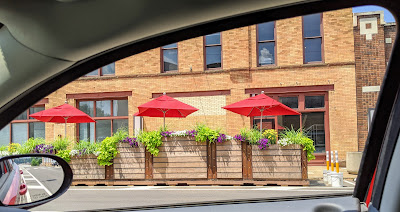 I did say I would take pictures of the colorful new downtown, but that was easy to promise on an uneventful Sunday afternoon dry run to the hospital and enroute to the event on Thursday, post lunch hour. 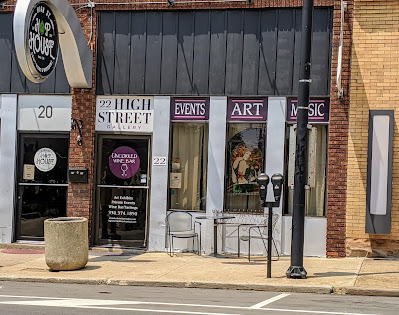 As for the ultrasound, what I saw was very interesting. I stood for the second half, and watched the screen as the technician followed the course of some vein, stopping to mark both sides of each valve. Eventually she said "Your veins cooperated admirably," and departed with my parking deck ticket. She came back with it and said I'd been there way less than an hour, so would escape the deck for free.
I just checked the internet for the losartan backorder, and see it is about contaminated ingredients in India. I knew about that, but in tracking the recall numbers these last several years, my factory in India never was involved. Now it is. It's still in the doctor's hands.
Since spring my sinuses have been in revolt; overloaded. An annual problem, and worse this year. Something happened a couple of days ago, at lunch, at my kitchen table. The table is against a window that has fake pane dividers. I was looking down at my book, looked up and heard a click in my ears that sounded like a door latching.
Suddenly the window panes began flipping, like an old time movie reel. I could not look left or right without adding dizziness to the scene of flipping window panes. So, window panes it was, until the episode ended.
The thunderstorms are now pushed back another forty five minutes. I have accumulated ingredients for cottage cheese and noodles for supper. Off to put it in the oven.
Posted by Joanne Noragon at 3:57 PM