Not much to say--clean house and scalloped potato recipe

The two young women came to the door on time. I told them that when I had "cleaning ladies", they began at opposite ends and met in the middle, one hour later. I hoped they could do the same, and they did.
They worked from my bedroom and the living room to the middle, saving the studio for the last. After a little more illumination of their job, I disappeared into the studio and wove for an hour. When Addy came in to vacuum, I explained the easiest way to tackle the litter and the cotton dust under the loom, and we all reconvened in the kitchen in an hour.
I understand they were so excited at their wages and tip they stopped at their friend Cathy's house to squeal in delight. Cathy attracts children like metal to magnets. My house cleaners are going into ninth and tenth grades, so about fourteen and fifteen. I told them I would have them back in three weeks. They very professionally cleaned up after themselves, thanked me and left. 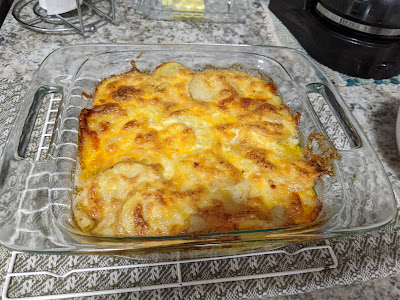 Scalloped potatoes: an 8x8" or 9x9" will work; there are 4 cups of potatoes here, and the dish could hold another two.
4 cups thinly sliced potatoes (Yukon Gold or Russet) about 2#
3 tablespoons butter
3 tablespoons flour
1 1/2 cups milk
1 teaspoon salt
1 dash cayenne pepper
1 1/2 cups grated sharp cheddar cheese, divided
Paprika
Note: I used less than half a cup of cheddar, melted into the rue. I don't have cayenne, and used hot pepper flakes. Mustard powder would have been good, too. I didn't use paprika.
Preheat oven to 350 degrees. Grease 1.5 quart baking dish. 8x8 or 9x9.
In a small sauce pan, melt butter and stir in flour. Stir to bubbly, thick consistency. A minute or two.
Whisk in milk and season with salt and cayenne.
Cook sauce on low until smooth and bubbling, stirring occasionally with a whisk.
Reduce heat and stir in up to 1 cup of cheddar cheese.
Put half the potatoes in baking dish. Smooth out to an even layer.
Pour half the sauce over the potatoes. No need to mix evenly.
Repeat with second layer of potatoes and cheese sauce.
Sprinkle the remaining 1/2 cup of cheese on top. Top with paprika for color.
Bake uncovered for about 1 hour at 350 degrees F, or until potatoes are fork tender and top is browned.
I believe the secret to this recipe is the thinness of the slices of potatoes. I think back on scalloped potatoes at childhood suppers, and they were quarter inch or more slices. The taters often had a crunch. The second "secret" is making the flour/butter combo bubble in the pan, and bringing the rue back to a thickened bubble. And, that's all I can tell you about cooking.
Posted by Joanne Noragon at 6:26 PM