I hate being old in the middle of a health epidemic, with a buffoon as the leader and clowns bringing up the rear

I avoided saying "my leader"! But worst of all, why am I always putting the needle to the bubble?
I'm seeing my counselor again. Last March I was seeing Kathleen maybe once a month. We were pretty talked out. When she called to turn our April appointment into a phone appointment, I decided just to take a break altogether.
Floating, bouncing, haunting, loitering around this bubble all summer only augmented my ability to think, and especially about this coming winter. I like regularity. Larry takes my trash to the curb. Don mows the grass. I've never found someone to clear the snow.
One solution is to abandon the snow. Move to assisted living. I've completed all the paperwork except the doctor's certification of health. I wonder if that's a crap shoot. It is in a couple of weeks. I won't move, at least not yet, but at least it's settled, one way or another.
I will figure out how to hire a reliable snow remover.
On the other hand, just go to the cafeteria for meals. But, who would make crostatas?  For lunch today I finished the blueberry I made the other day. When lunch was over, I rummaged in the pantry for an appropriate plate. Who said it must be round? 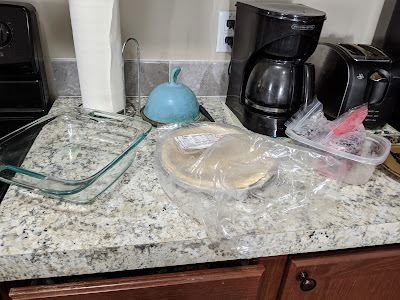 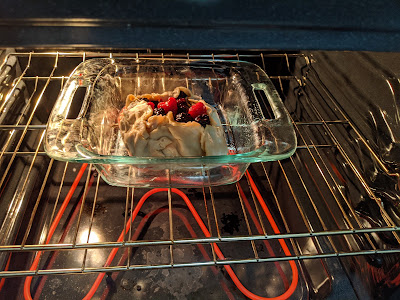 The worst part of my life right now is the damn warp. I sat down after lunch, with a smile on my face and a clear head and tied on two bouts before my fingers cramped and fumbled. It will do me no good to try again before tomorrow. So, five are tied, six to go.
To keep up my enthusiasm, I put my two blues on the table. I will choose one to weave with next. 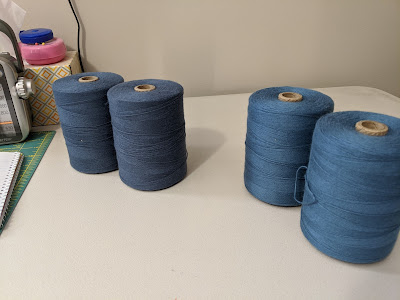 One is called denim and one is called jeans. Any guesses? I am so pleased all the colors were named by Monsieur Brassard, and I need only order them.
When I decided to weave towels for sale, I ordered thirty seven colors, and have woven through about half. The only additional color I've ordered is black. Not only was I surprised to have a customer want it, I was surprised to sell the rest. Few are left. After the blue, I'll weave grey. Can you believe someone wants grey towels?
Posted by Joanne Noragon at 3:55 PM