Sometimes I feel like my cat should feel. He doesn't follow me from room to room, but he makes sure he arrives shortly after I do. Every night I tell him "Time to leave," and sometimes he does and sometimes there is an argument. Every morning he's outside the bedroom door. I wonder if that's where he spends his night.
I'm sulky of late. For the next four weeks I have nothing to do and nowhere to go. There is one family birthday in there, but after I send wishes, nothing more will occur.  This state of affairs predates Covid-19 by four or five years. It is what it is.
Occasionally Amazon comes through. It's Sunday, and a package just arrived. The elastic stockings with toes. I just opened a new tab to answer the delivery question. It is great. 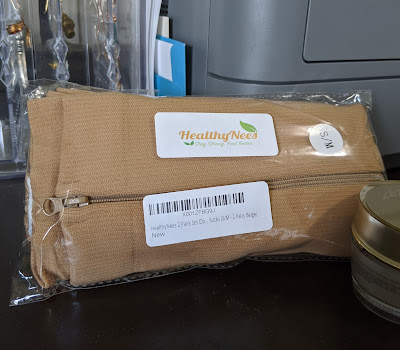 These are not my first elastic stockings. The first set were toeless. I thought they were a good idea, but I did not know enough. They made my toes pudgy. I am no expert on shipments from China (I did get that watch refund!), but there was a fun experience with that long ago shipment of zippered elastic stockings. The company sent a chipper little email asking, How did I Like, and would I Send a Picture?
And I responded, send me another pair, and on receipt, I will send the picture. That effectively ended our correspondence.
I am back reeling from the damn Lasix. It renders me loopy or comatose. I did not take any the week leading up to the vascular scan, because I did not dare drive under the influence. Today I got up at ten. I did outdoor chores before heat. Eighty-one degrees, and I'm complaining. 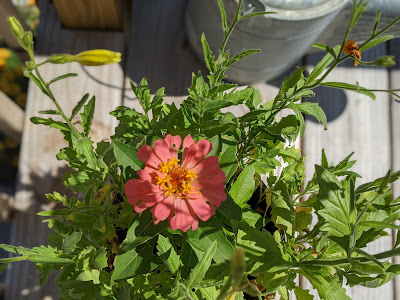 My zinnia, holding down the entire pot of salpiglosis, long for painted tongue. 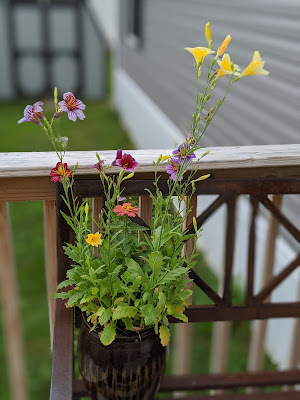 The "real" pot of zinnias needed direct attention. In my haste the other day, I put the seeds in a clay pot with no drainage hole! After yesterday's big rain, the seedlings were floating! I wedged the pot on its side, poorly, and attacked the bottom with a hammer and a phillips. It worked. 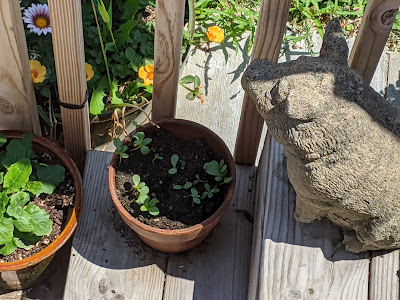 And finally, I began my morning weaving. I am past the end of the last run of towels, nice orange towels. But they are still on the beam, because I also within striking distance of the end of the warp. I had a partial spool of lavender, which wound onto eight bobbins, or four towels. If there is warp left, I'll weave it off in cream. 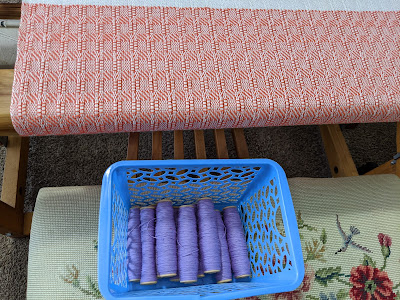 I was down to the last four bobbins when I nodded off. I moved to my desk chair, where I can restrict nodding off to half an hour or so. Then I wrote a post. Back to finishing the warp, because all those towels to finish and a warp to wind on is something to do.
Posted by Joanne Noragon at 4:04 PM