A new day in the life

When I was dead tired last night, and making supper, I needed to mince garlic. I can do that. I reached for the jar with two new heads of garlic. Totally stumped. The last time I handled garlic from scratch was before Laura.

Google said put it in a plastic bag and give the root end a good smack. I quit after one thump. My palm is still bruised today. I looked around, picked up the knife holder for a mallet and it let fly. Woohoo, a bag of cloves. The paper kept flying as I put them back in the jar. I think if I shook the bejammers out of that jar, I could separate them from their skins. 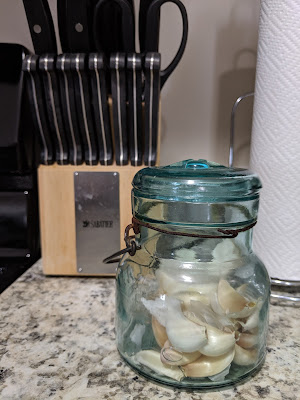 Jenny_O wonders what I bought at Abby Ann's. The clerk wrote it up as the Pumpkin Bowl. $2.56. 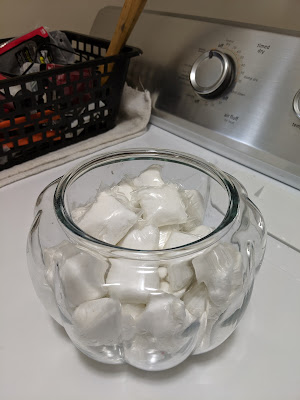 I want a way to keep my soap pods accessible. I made an emergency run to Abby Ann's the other day. I gave Laura the casseroles I improvised to a double boiler for brown bread. 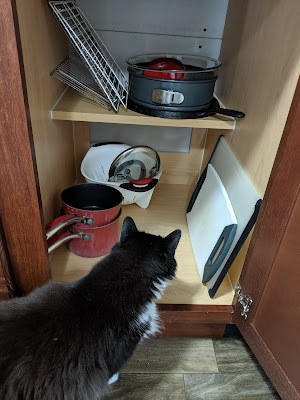 I bought a Pyrex casserole that's stashed there in the spring form cheesecake pan. The red lid is to the red tin cup I use to bake brown bread. 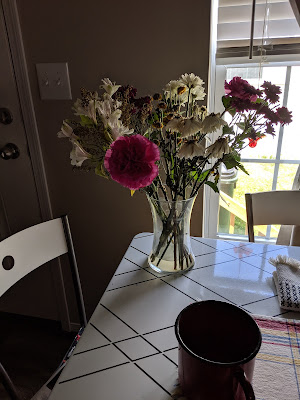 I emptied the trash and missed the flowers, so they went out separately. There is the red cup passed along to me from Alberta. I had a note from Linda, Alberta passed away July 2nd, at 102.  Alberta is at the picnic table in the picture sidebar. I so admired her.

There was much on my list for today, and I have only accomplished trash and flower watering. I have an afternoon of shopping to do; three stops. It is raining torrents. I will go put more thread on the beam. 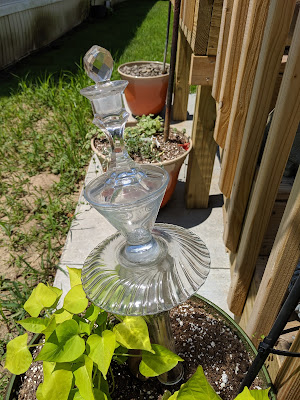 So, I'm closing with my dancing glass lady, who acquired the suitable size upright this morning, while the sun was shining and the rain was still in Wisconsin, according to Ann.

Posted by Joanne Noragon at 3:13 PM