Wednesday evening my sister brought me home. Here's what one month of unfinished business looks like. It would be worse, except Laura brought me all the mail she got, and we put our junk in Regina's trash and I paid bills on my cell phone. 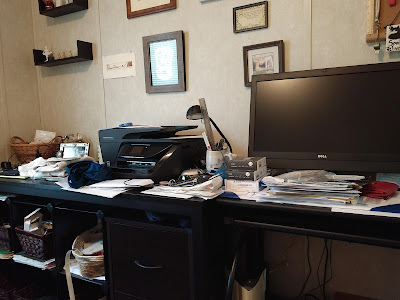 Took me one day to get down to the desk pad. That was Thursday. I finished much off today, after an appointment with the young kid doctor who put the titanium rod in my leg.

He gave me a copy of the x-ray. I tried to scan it, but once again my HP Office Jet Pro is convinced it is not associated with my Dell Windows 10. So just let me report, a 9 nine inch long titanium spike, with 8 screws through it. Dr. Wilkie showed me the line that is mending, four weeks later. I can only see a separation where the break started, at the knee. 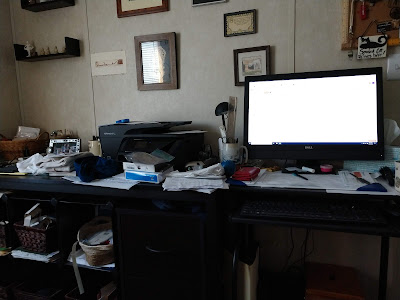 He asked how my recovery was coming, and I said save for the effing knees, not bad. Based on year old x-rays of my knees, for which he recommended replacements and I turned him down, he injected my uninjured knee with cortisone. I prompted a shot for the right knee, too. He grinned. "I don't think so. You'd take advantage." 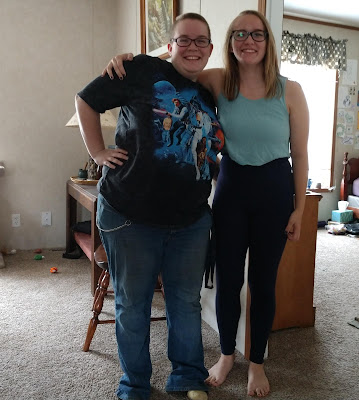 My very oldest granddaughter stopped by tonight. Bekka is twenty five, and welds for an aerospace company. The hair cut is brand spanking new. Her mother doesn't even know, let alone seen it. 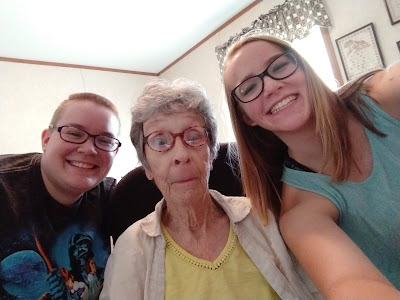 And speaking of haircuts, the final picture of me with an extra month's growth. Melanie says she'll "see what I can do with it," and I said "Cut it off!" "We'll see," said a very pleased Mel.

So, that's all the whining for a while. Work to do. We have lot's of post cards to address to registered voters who skipped the last election. Get out and vote. Go to the polls in November. If you don't vote, you don't count!
Posted by Joanne Noragon at 6:35 PM