I’ve complained about bicyclists for longer than I’ve had a blog. On occasion I’ve taken pictures of bicycles on the road, described with some disdain. In fact, the township recently suffered bicycle events that bordered on cataclysmic, if you live in or drive in the township. One is a state law; one a federal ruling. It’s not possible to rank the sublime and the ridiculous, so here they are, in no particular order.

The state of Ohio has ruled bicycles may ride two abreast, and cars must give them three feet of clearance. The visual fulfills sublime to ridiculous on its own. There are posters all over town, all over the roads, of two bikers, side by side, and a car passing. The car’s door is open, to demonstrate a visual of three feet.

Ohio township roads may be as little as twenty feet wide, but generally are thirty feet. That divvies out to fifteen feet per lane, less things like the center line and the berm. Let’s say one polite rider is on the berm; his buddy is side by side, consuming say, a yard of actual road. So, fifteen feet are reduced to twelve. Whoops, less three feet of door, in order to pass, is nine feet. The average car takes more than six feet of width.

You get the picture. Bicycles own the road in townships. Our fine (R) representative, Jim Rinnacci, held a hearing no one knew of until the law was passed. Bikers presented testimony. The testimony has been sealed. The law says that the speed limit on all township roads that pass through a federal park (in the foot note, Boston Township and the Cuyahoga Valley National Park are noted as the only roads meeting the standard) will be twenty five miles per hour.

There ya go, folks. For a nice afternoon of traffic constricted bicycle riding, come on down to Boston Township and ride in the national park.

The other day, going to work, I passed a small car parked in a ditch, and across the road saw a fellow bending low, seeming to be looking. This was at the very top of Kendall Road. I slowed to see if I could help, and saw an old man, sweeping the berm.  A definite “do not get involved” situation, and I sped up to 25 mph  to continue on.

Coming home a couple of hours later, I passed the fellow again. He’d worked his way a couple of miles down the road, and only had the big bend at the Boy Scout Camp and past the lake at the golf course, to get on down to Akron Peninsula Road. Definitely under the speed limit.

I could restrain myself no longer. I took possession of the gully where I park to photograph my header tree, and said I had to tell him a story.

This township is overrun by bikes every day, and simply consumed every spring, summer and fall weekend. Years ago I relayed a phone message to the trustees: “It would be courteous of you to keep the berms swept for us.” The answer was, “Sweep them yourselves.” But, he never called back. All these years I’ve waited.

And there he was, sweeping the berms. We laughed, shook hands, and went on our respective ways. 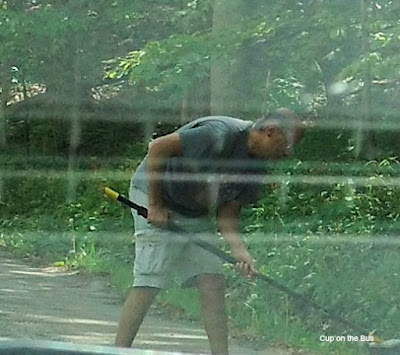 Note to self--pictures through windshields generally are not optimal pictures.
Posted by Joanne Noragon at 6:05 PM