A fine flowing ditch of serendipity

When we moved in last July, there were some less than wonderful aspects of the house and property, as there always are. One was drainage of storm water. Occasionally I would take the maintenance man by the elbow and point out the defects, some of which were attended to, and most of which were not. Management here was no better, and management “higher up” was useless, which sometimes is the problem with rental property. If yours does not meet these standards, bake cookies, often.

When my next door neighbor and soon to be friend moved in, her tolerance level for less than her standard took her toe to toe with management even sooner than it did me. By fall I was so concerned about her blood pressure I suggested she back off and leave it to me. What happened next shows there is serendipity in more than we know.

I asked Mr. Google several times for an organization that regulated mobile home parks and struck gold with the Association of Manufactured Home Residents in Ohio living in Communities (formerly known as parks)…and so forth and so on, that actually regulates the park conditions.

To be sure, I called the head of my county’s health district, and got the name and phone number of the Association’s director, to boot. Then, when I dialed the number in the state’s capitol, the director himself answered the phone. It may be that small, or that understaffed, but it was a real talking person, and we had a real conversation.

“Yes,” he said, “we are working hard to bring the last of these communities into compliance,” and “yes, I will have Bob near that address next week. I’ll have him make a call and look around.” Bob picked a perfect day to take a look, because not only did he encounter flooded properties, mine and my neighbor’s included, Bob met the next level of management, looking around the property for the first time in a year or so (according to some other flabbergasted residents). I think perhaps Bob knew who to call and say “Want to walk the property with me tomorrow?”

Sometime during the week, Bob’s boss called me and said Bob had reported that management said the entire problem would be solved by the end of March. This was during one of those spring like days in January. I made a note on my desk pad and proceeded to forget about it.

I left for spring break vacation in DC with granddaughters, not considering the note on my desk pad about drainage resolution, and at the end of March I was comatose, with no recollection of the drainage of my property being corrected.

When I actually returned home at the very end of April, drainage still was not on my mind. An entire week of May passed before my neighbor, who schmoozes with people and knows things said “Aren’t you excited! They’re starting the drains this week.” And by golly, they did.

Perhaps the universe had me in a coma for a reason, men tending not to work so well when nagged.

Today Dan, the maintenance guy, told me about the pipe with holes under the gravel, and when it settles a bit, they’ll dress the top with topsoil and plant seed. I told Dan that would be great, and not one more word that might sound nagging. 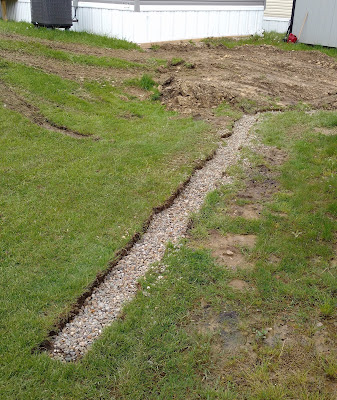 Posted by Joanne Noragon at 9:09 PM