Waiting can take half a day at a time from life, or more.  Some waits better than others. I waited half a day for the washer and dryer to arrive and be installed. Except for not plugging in the washer, it went well.

I waited half a day for Time Warner to arrive and install cable TV and internet. Things went well until the tech realized he had overlooked my PC on his work order. He rushed the end of the job of pulling more cable to get the wireless router into position. Hold this thought. 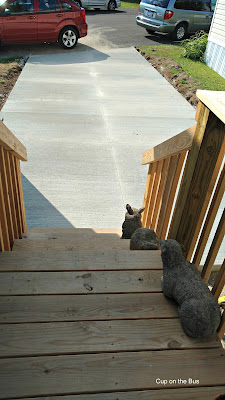 When I first looked at this unit, it was lacking the “driveway.” It was lacking a tenant, too, but from the instant I knew I wanted it, I wanted the drive in so I could carry out a scheme of turning the front area into a flower garden. The big plus will be someone else roto tilling. I simply will top dress and move plants in, or get new ones. The complex is down to one handyman, who told me he would do the job last Tuesday. Now management tells me it will be the end of this month. Still not too late, I suppose. 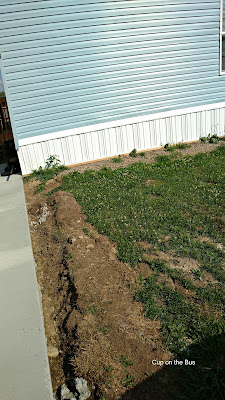 An enterprising young man named David did drop around and offer to get the ground in order for me. “My friend and I were thinking of renting a roto tiller…”  His age certainly did not exceed 14, and though I see he has posted a notice on the mailboxes to “do your gardening,” I think his imagination is ahead of his ability here. I said I’d keep him in mind for later.

There was no readily available TV to watch at the old house, so Laura and I were looking forward to our fill of HGTV, and whatever teenagers watch. I really had my heart set on the local channels, and made the Time Warner tech demonstrate them to me when he set up the TV—before I pointed out there was a PC on his work order, too, not just the girls laptops.

When I turned on the TV for the local news Friday, there were no local channels. CNN, yes, Channels 3, 5, and 8 stared back with blank screens. I called Time Warner, which sent a “fix” straight to the box. The change was to no TV at all. Time Warner robo called to ascertain my degree of happiness, and since it did not exist, gave me a live tech, who spent close to an hour not solving the problem. I must wait until tomorrow evening for another live tech to come to my door and resolve the issues.

In the meantime, here is a cat that does not wait. He simply “is.” 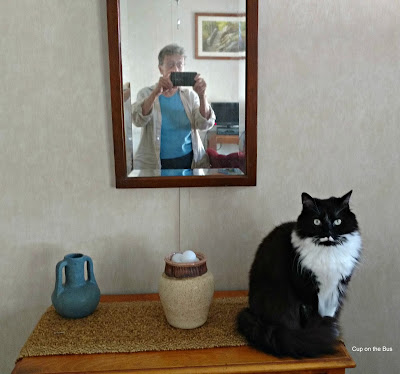 Posted by Joanne Noragon at 7:43 PM