Many years ago, when I was a working weaver, I did a Michigan Guild show in Greektown, Detroit. One of those arrive at 4 am Saturday morning shows, wait for the committee to come by, marking off booths. Set up, vans off the street by nine, show runs from ten to seven.

I stood beside my van, waiting, and a small woman came by with a broom, sweeping the dirt and pebbles away from the curb, into the middle of the road. “That’s very nice,” I said, thinking perhaps the Guild had hired her to do this. Soft southern tones came back, “I did where I think I’ll be and I thought you all could use a clean place, too.” That’s where I met Lucy.

She came back toward the end of the first day and asked if I’d booked a motel room. She always trusted to luck the first night, she told me, hoping to find a friend to bunk with. I took her back to my motel, and my long friendship with Lucy was begun.

Lucy was a retired math teacher. The height of her career covered a time when schools were meant for learning, and she had “what for” for the young ‘uns who were not so dumb as they wanted her to believe. Her husband was a retired college professor; she had three grown children, two sons and a daughter, two daughters-in-law, a son-in-law, grandsons a granddaughter.

Lucy also had a knack for designing and making hand puppets and bringing stories about them to life. Actually, she was good at several crafts, including weaving, but it was the puppets, and later the plush toys that became a business. Eventually her sons quit their jobs to buy the plush fabrics, manage her little shop and three sewers and provide enough inventory to keep Lucy on the road several months a year, at fairs.

Everything about Lucy was a marvel. She was ten years older than me, drove a van as big as mine, and pulled a trailer. With the trailer and van packed full she’d leave Anniston, Alabama for three months at a time. She did shows I barely knew of, in Texas, Oklahoma, St. Louis. She’d head on up into the Midwest, where I met her in Michigan. We did shows together, and roomed together, in Virginia, New York, New Jersey, the Carolina's…..

In those days before phones were common, if Lucy ever would have used one, when I’d check into a show the next thing I’d ask, “Is Lucy here?” Soon, they just told me Lucy already was there.  She set up a ten by twenty foot booth, constructed of two foot by six foot metal frames, gridded two by two inches. They were heavy. After she had all the uprights together, she and her two foot step stool constructed a ceiling of more frames, where extra big chair sized toys were stored.

When she was done setting up Lucy would appear, saying “Honey, I am so grateful I don’t have to unhitch that trailer to get to bed tonight.”

Lucy’s sons did all the booking of her shows, Lucy did all the selling. As the years went on, and Lucy’s hair turned from grey to white, her sons developed a probably well placed apprehension of the sorts of motels I booked. They were cheap, and Lucy didn’t care.

Lucy loved to tell stories, and probably repeated a couple too many back in Anniston. Like the morning she faced down a desk clerk telling an obviously pregnant and poorly dressed young woman to leave his lobby; he knew she hadn’t booked a room the night before and was not entitled to breakfast.  After Lucy quietly and thoroughly shamed the clerk, we paid a night’s lodging for the girl. Lucy wept for her, as we went to the show.

Her sons took over booking Lucy’s motels, and holy, moly, did we stay in some swank places. Dinner bars, sit down breakfasts, constant coffee, concierge, bell boys. Business hotels. The first time I stood at the counter with her, paying up to leave and the bill we split was sixty dollars for two nights she was grinning like the Cheshire cat. Hotels dot com, she explained. I never could make it work, but her sons could.

The last couple of years I worked my standard was being able to lift the hand truck up into my van. If I could do it in the spring, I was good for the season. My gold standard was Lucy. She was ten years older than me, drove a van just a long and hauled a trailer. I visited a couple of shows after I retired, just to hug Lucy. I wrote her a couple of emails, which her sons answered. “Lucy says hello, and she loves you. She just isn’t a letter writer.”

Linda met Lucy a couple of years ago, still doing shows, but now with her daughter or grandchildren. Linda emailed me, “She is such a pleasant lady and everyone knows and respects her. She told my neighbor that she needs to keep doing it as quitting means she will fail quickly. She lifted as many grids as her grandson. Said to tell you that she loves you.”

Last month, at Crosby Festival of the Arts, Linda pointed out to Emily a trailer with Alabama plates being backed around a sidewalk curve, with two inches to spare either side of the tires. As soon as everyone was settled, Linda sent Emily over to introduce herself. Lucy is still ten years older than me, drives a van as big as the one I used to drive and still hauls a trailer. She gave Emily a big hug and sent me her love. 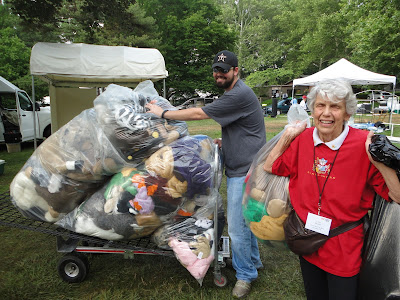 Posted by Joanne Noragon at 9:38 PM