The hummingbirds have been back for several weeks now.  We have two groups come through, the migratory Rufous, stopping over on their way to somewhere, and a couple of weeks later, the ruby throated hummers, who stay all summer.  It reverses in fall;  the ruby throated are gone one day, and a week or so later the migrants stop over for a day.  Then the feeders come down for another year.


Both breeds have the same attitude toward the feeders:  they better be full and fresh.  The feeders don’t go up in April until we actually see a hummer, which has led to finding a little fellow hovering at the front door, looking in.  Then retreating to the phone wire and watching until the feeder is hung.  Tom once had a Rufous hover at his ears all across the porch over to the feeder pole.


For attitude, nothing beats a ruby throated hummingbird.  Not even a bluejay screeching at a cat and dive bombing it to a new location.  We have two feeders, one front and one back.  They seem to be used by two different groups.  The back of the house group seem to take the feeder as they find it.  A full feeder, great, a good meal.  Needs replenished, well, we’ll try again later.  The front of the house group expect feeder service on demand.


I was sitting on the porch one summer, chatting with my brother.  Suddenly I could not focus on some buzzing creature literally tapping on my glasses.  I could not brush it away.  Walt was doubled over with laughter.  A hummingbird not pleased with the freshness of the feeder.  When it backed off I could get up to look, and it was possibly correct in its assessment.  The bird stayed inches away as I took down the feeder, and it did not leave the porch.  I whipped up a replacement order in the kitchen and hung it up.  The hummer didn’t say Thank You.


Hummingbirds live five or six years.  That’s about how long we enjoyed the antics of one bombastic little hummer.  We had to call him little Hitler.  Male hummers spend a deal of time driving other hummers from the feeder.  Then, they don’t eat themselves; they retreat to a bare twig of a tree and wait for a new intruder.


Little Hitler claimed both the front and back feeder as his own.  He spent countless hours in flight over the roof of the house in reconnaissance and offense.  When confident neither feeder was in imminent danger he sat on the phone wire in the front of the house, periodically rising straight up for a view of the back feeder, then settling back down to the wire.  We miss his antics.


Several years ago the feeders stayed up late in September.  We hadn’t seen a Rufous for a few days, but no one had taken down the feeders.  One night I heard a rustling on the porch and looked out at something I’ve not seen since.  A  flock encircling the perch on the round feeder.  There are four feeding holes on the feeder, but easily room for about twelve humming birds and that seemed to be the count.  They were feeding then rising up and changing places so another bird could feed.  Except the hole nearest me, where the bird had her beak immersed, and she never raised her head.  Her feathers were tousled and a couple stuck out from her body, as if plucking had failed.  It had been a rough trip for her.  Her beak stayed down in the hole like a third leg supporting her.


The others kept changing positions at the feeder, but no one bothered this bird.  I watched them for ten minutes, until they left in the dusk and settled on twigs for the night.  I stayed until they left because I wondered if the beat up bird could lift her head and leave.  She did. 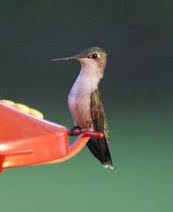