It's seven, closing in on my bed time. If I can put together a post in an hour, I can read blogs until bedtime. I would like that.

I wanted someone else to make breakfast, so Jim, Lynn and I went to another breakfast joint. The two of them have visited every restaurant in a three county area that serves breakfast. The last three, including this morning's, have been indelibly scratched.

One made Lynn very ill, as in out of it for three days, two of them in bed. She wrote a letter and has had no response, not even an apology. 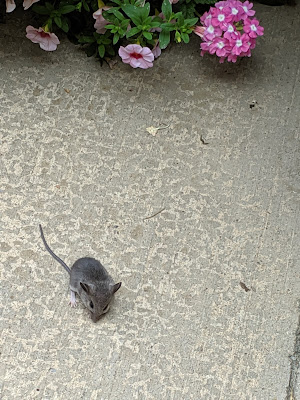 On the way home we stopped at the nursery for a bag of fertilizer recommended to them. We passed a mouse  gasping its last. Ending its misery was not in our pay grade. I did buy a lot of three dollar pots to add color. 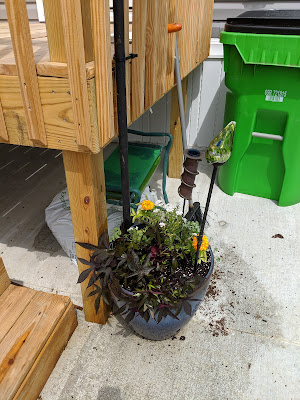 I scored a three dollar Gerbera daisy, but I don't know the color yet. 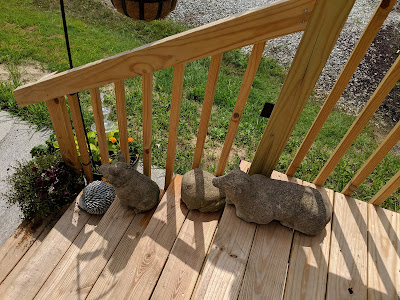 The Gerbera, the shamrock, Pig and Hedgy all need to trade places. 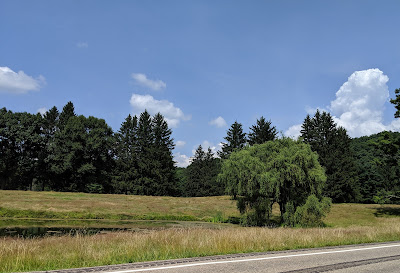 Coming back from cards, I stopped for the golf course picture. It is becoming quite rough! Nancy and I had a great card day, putting together one great play after another. You're pretty much as good as the cards dealt, and we did what we should with what we got.

When I came in from cards, I made a new mac and cheese recipe I found. It's ninety minutes in the slow cooker. I haven't made mac and cheese since I had school children at home, I think. From my years of doing and watching, this didn't sound unreasonable.

In fact, it called for cream cheese and a little more milk than I recall using, but I'm a fan of cream cheese, and forged on. I'm here to report, what may sound good is not necessarily so. I may look around for a new recipe, or tinker with the one I found.

My taste buds told me if I skipped the cream cheese, substituted water for the milk, skipped the butter and most of the quarter teaspoon paprika, it would have been good.

Posted by Joanne Noragon at 7:37 PM