The words in the music

I've read little in blogland on the passing of Pete Seeger late last month. I did read the complete transcript of his appearance before the House Committee on Un-American Activities. He was certainly as relentless as his questioners.

Pete Seeger was my gateway to both folk music and activism. I stumbled into the music easily enough, in the first weeks of my freshman year at college. Soon there was a group of us, sitting around a big record player, listening to each other’s records.

The group was so diverse; Ernesto, whose family escaped Hungary just before their revolution. He had incredible Italian and Hungarian albums. Mim, an English girl, with Weavers albums. Two German fellows, Hans (red hair!), and the other an American, Alan. Me, Irish. And more, listening to the music, analyzing, criticizing.

I've mentioned once or twice, I’m tone deaf. Cannot carry any tune. If I sing in the car, my sister turns on the radio.  So little appreciation! Even I know, belting out a song, alone in my car, I am an awful singer. But, it’s the words that matter.

The words were about ideas, issues, history. I didn't learn Irish history from The Clancy Brothers, but I learned concepts, events, times to look up. I didn't learn activism from Pete Seeger or Woody Gutherie, I learned where to look in the library for the history of the labor movement and social activism. Young Bob Dylan carried Woody Guthrie’s torch for us; remember Deportees, together with Joan Baez? Wow.

I didn't get on a bus to protest, but I marched to protest the bombing of Cambodia. I didn't go to the March on Washington, but I did stand with locked arms in front of bulldozers intending to demolish a street of trees to widen a boulevard in Cleveland. Almost fifty years ago, and trees still line the old boulevard.

It took a Pete Seeger and his magnificent voice to help the country to integration. Deep in my heart I do believe, we shall overcome some day, his voice soaring to the heavens to lift the movement along. Hollering to us to join in.

The generation moved along into their thirties; we got responsibilities. The war and the urgency ended, save for the new environmental activists like Pete Seeger and the Hudson River he set out to save, single handedly if need be.

I got tickets round for some friends when Pete Seeger and Arlo Guthrie were in Cleveland. Old friends, but newer than my college days. They were up for a night out. Pete warmed us up a bit, then demanded to know how many were drug there! Laughter. He demanded a show of hands, and a sea of hands went up. Another round of laughter. “You having a good time?” A resounding “Yes!”

I almost met him once, at a folk festival. He was talking to my sister, behind me. I heard him say, “This has been nice. Now I need to find Mother.”

“Who was that,” I asked when I could turn around. “I think his name is Pete Seeger,” my sister replied. 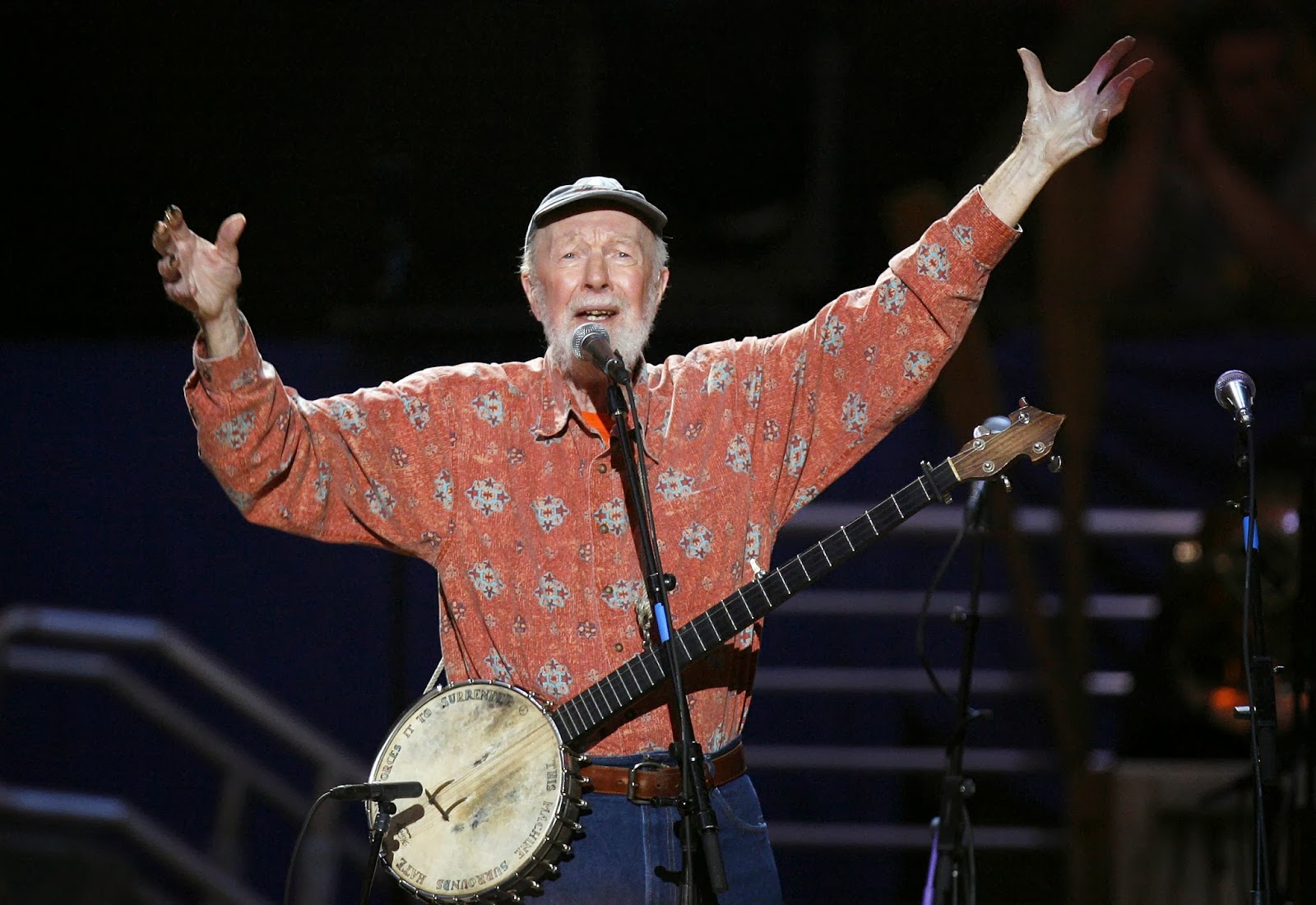 Click on the picture, make it big, read the banjo head:

This machine surrounds hate and forces it to surrender.

Woody Guthrie's banjo surrounded fascism, to force it to surrender.

Posted by Joanne Noragon at 1:09 PM

Email ThisBlogThis!Share to TwitterShare to FacebookShare to Pinterest
Labels: music