Playing in the rain


Delores at the Feathered Nest said, over the weekend,

To be an Ontarion on vacation with children in the rain is akin to being on a short trip via a fast train to insanity.

I guess we did not have to look at the weather channel to know the weather in Ontario Saturday and Sunday.

I have good childhood memories of playing in the rain.  For instance, one time an army of little children clothed generally only in white underpants, under the leadership of “the big boys” carted enough rocks and rubbish to build a magnificent dam at the foot of the road, as the rain fell.  We scurried to orders, reinforcing both ends, making it higher in the middle.  When the dam broke, water rushed down, undercutting the bed of our undedicated road.  “Undedicated” meant the road belonged to the adjacent landowners and the city was not responsible for repairs.  A lot of unhappy fathers trundled in wheelbarrows of sand that night, filling in the void.  I think “the big boys” were put to work, too.  I know a lot of saggy, dirty bottomed underwear attired little kids lined up, watching.

A couple of summers ago, during a week when they were the only cousins at the house, Laura and Emily were out in bathing suits splashing in the dogs’ wading pool.  Later I realized they were running down to the swing, pouring their water bottle contents on the slide, trying for the effect of a water slide.  A valiant effort, with no success. Days later it did rain.  I sent them to get into bathing suits on the double; there was a water slide right down at the swing set.  Oh, the mud on them when they came in.

Sending grandchildren out to play in the rain is not one of our especial Camp 61 activities.  But the first week of this month, Emily was at band camp and the three remaining children kept finding more loose ends than the law allows.    Three children were out bickering each other in our small house. Then one evening it rained.  Hard.  I told them to go out and play. 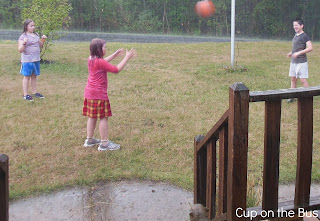 Posted by Joanne Noragon at 1:29 PM