Stand back from the car

Years ago, probably the late ‘80’s, when America’s love affair with the SUV was barely conceived, Jan and I were walking through a parking lot and saw one of the creatures parked near her truck.  It was a handsome vehicle and we detoured to take a better look.  About two feet from the SUV its lights flashed and it said “Stand back from the car.”


We retreated, looked about for some hidden trickster, then tried again.  Within about two feet we were again warned, “Stand back from the car.”  We climbed into her big grey Dodge Ram Charger and laughed all the way home at some pretentious Ford or Chevy vehicle telling us to stand back.


I was at the grocery store the other day, gathering myself together to leave.  Parcels parked, seat belt fastened, I started the car.  Immediately the car parked nose to nose to me flashed its lights and honked.  In warning?  I looked around and saw no one.  I put the car in reverse.  The car facing me blinked and honked again, and I could imagine it saying “Put it in reverse before you move.”  I went possibly an inch backward and the car blinked and honked again.  Consumed with curiosity, I put my car back in park and waited to see what that car would do next.


It blinked and honked again.  To my left at the end of the row I saw a woman approaching, arm held high, keys dangling, her thumb pumping up and down.  I’ll bet she had been unlocking that car from the time she walked out of the store, five hundred feet away.  I drive a highly overrated, retro PT Cruiser, unlocked with a retro key.  I haven’t electronically unlocked a door for several years, and that possibility did not cross my mind when the car began honking and blinking at me.  Besides, who tries to unlock their car from 1/10 of a mile away.


Back at home I told Jan about the blinking honker and then flashed on that SUV years ago.  “Do you remember that car in the parking lot that talked.  What did it say?”


“Stand back from the car!” 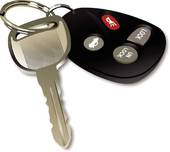 Posted by Joanne Noragon at 5:57 PM

Email ThisBlogThis!Share to TwitterShare to FacebookShare to Pinterest
Labels: misc