I like to listen to stories, especially stories of older folks about their experiences.  Jan and I took our spinning wheels to shows and the spinning brought out so many old stories.  Old men telling how they had unloaded cotton bales to spinning mills in the south.  The adult children saying “Nobody wants to hear those old stories, Dad.”  But I did want to hear them.  One lovely afternoon a frail old woman stopped and then in heavily accented English described her job in a silk mill in France during the war.  This time the children and grandchildren were as entranced as I as the old woman showed how they reeled the silk from the cocoons.   I asked how old she had been and she said from age 14 to age 18.  It was not hard, she said, but very tedious and the days were very long.  The war, of course, was the Great War, the first world war.


My hands down favorite old story came from a paratrooper.   Spinning puts the spinner about belt level of everyone passing by or stopping, and one older fellow had been watching in total silence for some time.  I commented that my brother-in-law also wore an 85th paratrooper buckle.  Yes, he’d been in the 85th during the war.  Back to silence, so I just kept spinning.


Suddenly he asked if he could see if he could still spin. He was quite intense, as was the question, and I wrapped the very fine sock yarn I was spinning around the knob, stood up and gave him the chair.  He unwrapped the strand, drafted a little fiber, flicked the wheel and commenced to produce yarn equal to what I had on the wheel.  He spun to the end of the rolag, twisted his end around the knob, stood up, said “Thank you,” and was two steps into leaving before I could gather my thoughts.


“Wait, wait.  Please tell me how you learned to spin.”


He was a paratrooper in the second world war.  He jumped with several other men on some mission behind the lines, in Belgium.  All the men who jumped were separated in the air.  He landed alone in a field and was found by Belgian resistance, who took him to a farm.  He had been hurt in the jump and was of little practical use to the men, so the women put him in a cap, a skirt, a blouse, a shawl and put him in front of a spinning wheel, with instructions to make it look good.


As all spinners know, it only looks difficult.  He learned the technique, and having nothing else to do, mastered the technique.  Until he was liberated he made yarn the old women were proud to knit into socks and balaclavas for the men.  He said he’d spun on a chair wheel similar to mine, and the wheel style had caught his attention.  Before he left he told me I had a very nice wheel.


A chair wheel simply means a wheel with four legs on the ground and stretchers between the legs to provide stability and immobility.  It’s a tough Google, but here is a Shaker style chair wheel and its web site.  When I have to get mine out of the closet, I’ll take its picture.  Except for four legs, it doesn’t resemble this one. 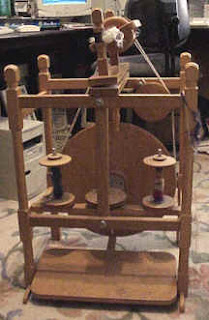 I was hoping to find a picture of the chair wheel I once saw in the Museum of the Appalachia’s.   it also was a chair.  The seat lifted up to reveal a horizontal wheel, the treadle was underneath.  I don’t remember the placement of the flyer.
Posted by Joanne Noragon at 3:02 PM