The bits and the glue

When I was growing up parents were not as essential to children as they seem to be now.  We walked to school; the big kids looked out for the little kids.  We walked home for lunch and after school.  We walked or rode bikes everywhere.  Baseball games were pick-up in our side lot.  We walked to church, unless our mother was going, then we went in the car.  Because we were in the house as little as possible, we had little need to interact with adults.  If adults were around and talking, they shooed us out.  So, the stuff we learned about our parents, about their lives before they had us, how they related to other people, mostly came from overheard tidbits we may or may not have been interested in.


My grandma, however, was great with the tidbits when I was a little older.  I learned my father had been a Catholic, but gave that up long before he met my mother, who was a Baptist.  I learned the only representative of my father’s side of the family at their wedding was his mother, the rest of his large, Catholic, Irish family having disowned him for leaving the church and breaking his mother’s heart.  Of course they could not attend his wedding.  My own grandma didn’t approve of my father’s Irish heritage, but I loved her and didn’t listen to those opinions.


We lived in a largely Italian Catholic neighborhood; a few Protestants here and there on the six or so streets that were our immediate range.  I was very small when informed by older children that my brother and I were not Catholic, and they could not play with us.  But, there were more than enough friends to go around! Ironically, my sister’s best friend was the younger sister of some of those older children who could not play with us.


My brothers and I had a very strange encounter once.  We were probably 9, 7 and 4 at the time, and home alone because Mom had gone to get Dad from work.  A Catholic priest and two of those children who could not play with us came to the door.  It was summer, and through the screen door we learned our father was condemned to hell, we children were bastards destined to the same fate.  However, we could save our father and ourselves by bringing our father and mother (who had to be converted) to the church to be married and us to be baptized, and so forth and so on.  We got rid of them before Mom and Dad got home and never breathed one word of it to our parents.  I asked my brother once if he remembered that visit.  He laughed.  That episode was part of the normal state of ignoring what we didn’t care to bother about.


The Catholic business was more exotic than disconcerting.  My father’s mother died when I was four, but I do remember her.  She was a very large woman, and I can remember her standing at the kitchen stove preparing dinner while I sat on the floor and tied the shoelaces of my Buster Browns in one knot after the other, all the way to the tips, muttering “Shoe won’t tie, dammit,” to her extreme amusement. Her lap was very comfortable. Things like that.  She became ill and was in an upstairs bedroom and a priest came to the house.  I wasn’t allowed upstairs.


Then she died and our house was full of people.  My Aunt Ruth (my father’s sister, who was a nun) and her friend, who was a nun of another order, tried on each other’s habits while I sat on my parents’ bed and watched.  They laughed and looked at themselves in the mirror.  Aunt Ruth’s was black, the other was grey.  I liked the grey one best.  I told my mother about it years later and she said “Of course.  They were young women and would like to see how they look in different clothing.”  I had another bit from my mother about that funeral in later years.  When Grandma died it was hot, hot, hot, she was pregnant with my younger brother and shopping for a burial plot.  Never again.  She bought four more plots, two for herself and dad, and two for “contingencies.”  And, she gave me title to three plots in the same cemetery and I believe she did the same for my older brother.


I remembered another Catholic bit while sorting through pictures.  My dad had a sea chest, from his days on the Great Lakes.  It was made of wood, and green.  Dad was sorting through the chest, looking for a book.  A portrait fluttered out of a book.  A young boy in a jacket, short trousers, white stockings, high black shoes, holding a book and beads.  In handwriting across the bottom:  Robin’s first communion.  I knew it was my dad.  He picked it up before I could.  I’ve never seen that picture again—it’s gone.  My mother would not have thrown it away.


Our Mom ignored all the barriers, too.  She was good friends with all her sisters-in-law.  We visited with some aunt, uncle and cousins two or three times a month.  When my mom, my Aunt Laura and Aunt Helen Rita were all widows, these aunts were generally my mom’s vacation companions.  Mom drove everywhere and until just a few months before her death.  With other friends they drove to see relatives or friends in Texas, in Florida, in Michigan, in Missouri.  Mom loved to travel.  Our Aunt Ruth had restrictions that kept her from the vacations with her sisters and with mom, but Aunt Ruth was her own kind of travelling woman and used her driving privileges to spend time here.  When we sorted out Mom’s papers there was a fairly new receipt for a grave marker for her mother-in-law.  It needed done, and fifty years later it was down to her.  And, she did it. 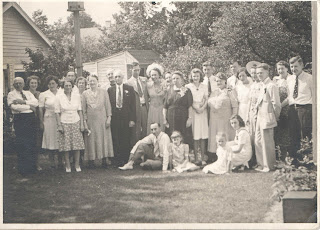 In the middle, the bride and groom, Mom and Dad.  Next my Grandma Rolf, my mom's mom.  Then a pretty girl, then my Grandma Lytle, my dad's mom.
Posted by Joanne Noragon at 5:06 PM